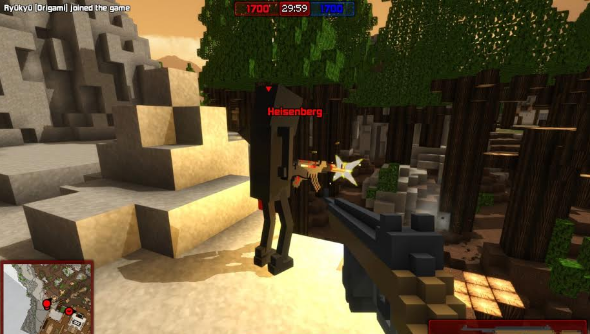 Blockstorm takes Minecraft’s shovel and makes a few holes in the multiplayer FPS as we know it. In gridded levels where you can add and remove blocks at will, watching your back is a matter of simply blocking up the passageway behind you – while camping becomes a craft that rewards careful construction and patience.

It also has a nifty sideline in player-customised maps and character models. Yesterday afternoon I saw Walter White dig a trench to catch his enemies, and was shot in the head by violent physicist Gordon Freeman. All in all, I had fun. Maybe you will too.

Here’s the deal: we’ve got 24 keys, which is enough to get another couple of lively matches going on Blockstorm’s servers.

If you’d be good enough to click the widget below to give the PCGamesN Facebook page a Like with a capital L, you’ll be in the running for a code. You’ll also begin to see erudite features and prompt news appear regularly in your feed, which is nice if you like that sort of thing.

The giveaway will close at midnight GMT on Tuesday May 26th.

We’ll pick the winners entirely at random – and if you’re one of them, you’ll find a series of letters and digits in your Facebook inbox. Copy and paste that gibberish into Steam’s ‘Activate a product’ box and you’ll be away, taking potshots at armed chefs and minotaurs from the top of a staircase in the sky.

Blockstorm’s user reviews over the past year of Early Access have been highly enthusiastic. I suspect they, like me, have enjoyed running about (and hiding in) maps they can visibly make their mark on. Gizza Like, and we’ll see if we can’t get you enjoying Blockstorm too.