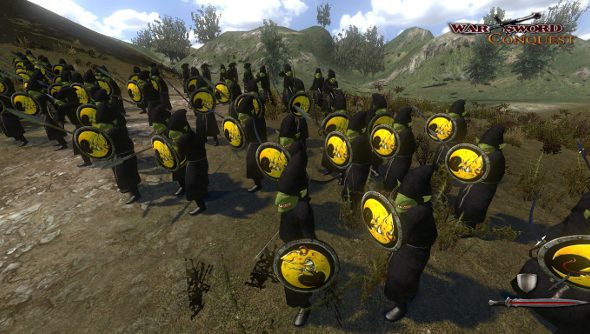 It’s been a while since I had the itch to reinstall Mount & Blade: Warband, though it was once an itch that never ceased. It looks like it’s back, because I can’t think of many things I’d rather do than play Warsword Conquest right bloody now. It’s a Warhammer total conversion mod, and that’s why.

Ride around the world as a skeleton ne’er do well, joining factions on a whim and split when your purse starts to feel a bit light. Or live the adventurous life of a murderous, boar-loving orc and ex-blood bowl player, pillaging and getting up to no good.

Warsword boasts 13 factions that you can join or simply flit between from lizardmen to skaven, all with their own unique items and mounts. I guess there are high elves too, but who’d choose to play as one of those snooty buggers. And then there are the big fellas, like trolls and ogres who can be recruited or slaughtered. Running around with an ogre for a pal? Sounds like heaven.

There are 33 Towns, 58 castles, 138 villages to protect or just pillage for kicks, and shifty bandits that include beastmen and smelly goblins. You can even sell prisoners. At the tavern, no less! How convenient.

You can grab the mod on Nexus Mods now, though it’s still in beta and is only for single-player. Still is seems like a ridiculous hoot.