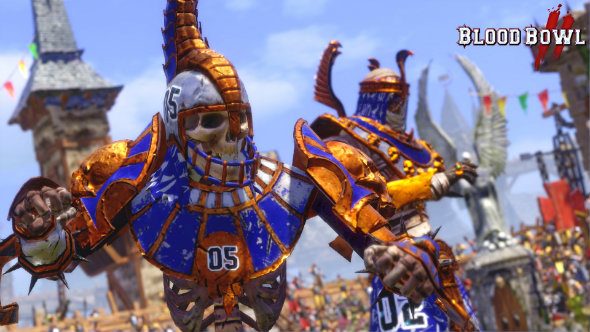 Fans of Cyanide Studio’s violent take on American football mashed up with the Warhammer universe will be pleased to hear that two new teams are now spilling blood on the grass. Both the Chaos Dwarfs and the Khemri are now available as separate DLC packs, or you can get both in the Team Pack on Steam.

The Blood Bowl series is a bit of a recent classic, but here’s a list of genuine golden oldies that you may prefer.

It would seem the Khemri are a team of undead players, which gives them the Regeneration skill, while certain members of the team have better Block and Pass skills. In comparison to other Undead teams, this means they can run and pass almost as well as the living races, but there’s a price to be paid. The majority of their team is comprised of skeletons and mummies, so you’ll need to manage them well not to lose them in the early stages of the game.

In comparison, the Chaos Dwarfs focus on a defence-oriented style of play, relying upon their powerful front line players. Meanwhile their Centaurs are super quick players who can rapidly retrieve the ball.

Head to the full announcement page for more details. We’d suggest buying the Team Pack if you’re lacking in extra teams, as it works out at much better value per team than buying them all individually.