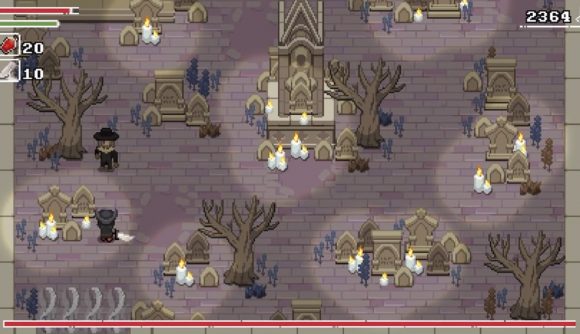 Since a Bloodborne port’s still not on the cards, one developer has decided to bring the Souls-like game to PC himself – by remaking it as a 16-bit Legend of Zelda-like.

Yarntown reimagines Bloodborne (cheers, VG247) as if it were made and released at the time of SNES classic Legend of Zelda: A Link to the Past. The work of one man, Max Mraz, the project includes Central Yarnham, mapped out as a colourful, top-down action-RPG. You start in the Hunter’s Dream, where you can get to grips the controls, complete with dreary soundtrack and enough candles to make any goth jealous, before venturing forth to the titular Yarntown to vanquish all the mad villagers and hellspawn that gets in your way.

Two boss fights are included, the Cleric Beast, and Father Gascoigne, and your moveset has been appropriately translated. You’ve the standard melee, which you can charge for more damage, a pistol, and the trusty dodge roll, which consumes stamina, of course. Weapons are upgradable, and you won’t be going far without your blood vials and quicksilver bullets. The map is delightfully well laid out, containing the kind of intuitive routing that makes exploring good open-world games like From Software’s oeuvre, and any Legend of Zelda, a treat.

You can see a short gameplay snippet below:

So I made Bloodborne but it’s super cute and it’s also kinda Zelda. And it’s out!:https://t.co/cjx5zz5lvC#screenshotsaturday #pixelart #indiegame #bloodborne#solarus pic.twitter.com/033IVYfHlp

You can download Yarntown on Itch.io here. Rumours were circulating last month that a Bloodborne remaster and PC port were on the way, but nothing’s been announced. Good excuse to keep working through our list of the best RPG games.