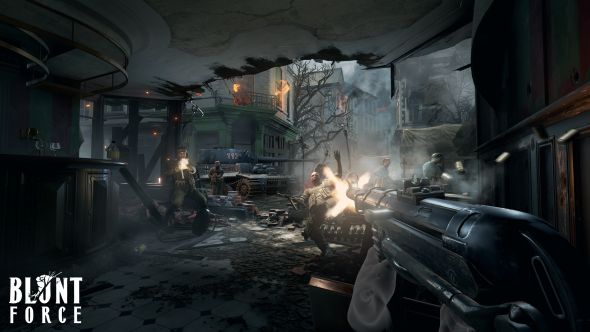 G2A, the videogame key marketplace, are developing their own virtual reality game. Entitled Blunt Force, it’s a shooter set in World War II, but there’s a twist: its wartime story will overlap with a peaceful exploration game set just before the war.

Splashed on a headset but don’t know what to play? Check our list of the best VR games on PC.

Blunt Force boasts a storyline developed in collaboration with screenwriter Mark Bristol, who has worked on Mission Impossible: Rogue Nation, Edge of Tomorrow, Saving Mr Banks and Battlefield 1, among others. In the pre-war timeline, there is little or no shooting, and players will explore the world looking for clues and secrets. During the war, they’ll shoot lots of Nazis. Naturally.

We got to try a demo of Blunt Force at G2A’s media day earlier this month, and had lots of fun throwing whisky glasses at a bartender during peacetime before the pub melted into a bombed-out husk and a pistol appeared on our table instead of a newspaper. Thrown into the war, we teleported between fixed points in a French village suffering the full force of the Nazi Blitzkrieg.

Hot take: fixed-point teleportation gives everything a bit of a static feel, but I’m definitely intrigued by the mix of two different genres within VR, and the ways the two storylines might interact. Anyway, it’s still in development, so too early to make judgements.

This is G2A’s first game, but not their first foray into virtual reality. G2A Land is a VR amusement park that’s been in progress for over two years now, and was even demoed by PewDiePie.

This is the latest of several ambitious new products that G2A announced at their media day, in a clear sign that being a marketplace for videogame keys is an incredibly lucrative business. G2A are also launching a service to 3D print figurines pulled directly from in-game models, making a bid for dominance in eCommerce, and confirmed the early success of their developer partnership scheme. G2A now numbers over 700 employees – rapid growth given they were founded less than six years ago.

And now they are VR game developers, too. G2A say that Blunt Force “will be released in episodes starting in 2017”.