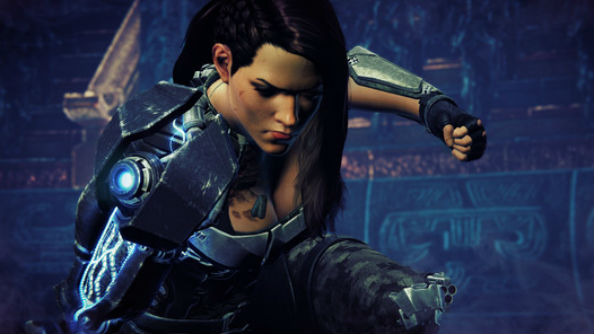 3D Realms’ upcoming third-person action RPG has got itself a new trailer featuring a whopping 45 seconds of aliens being punched to death over and over and over again. Titled the “Mighty Punch Trailer”, this latest look at the January-bound actioner shows of protagonist Shelly ‘Bombshell’ Harrison’s ability to punch stuff up real good.

Want more role playing and ass-kicking? Check out the best RPGs on PC.

This latest addition to Bombshell’s arsenal appears to make her quite the force to be reckoned with as she shoots through hordes of enemies, knocking them to the ground, setting off chains of explosions and sending many an alien to an early grave. For a short trailer featuring one move on repeat, it’s strangely captivating.

Set for release January 29th, 2016, Bombshell looks as frantic and blistering as ever and will hopefully give a boost to 3D Realms following the seemingly eternal development struggles they’ve been going through following the Duke Nukem licensing debacle.