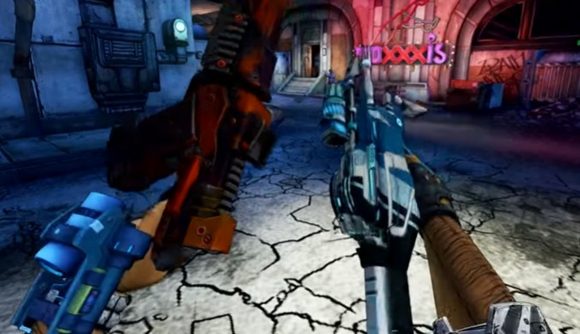 Vault-hunters will soon be able to explore Pandora like never before as Borderlands 2 VR is coming to PC Autumn 2019.

Previously released on Playstation VR last year, Borderlands 2 VR is an impressive porting of the sci-fi RPG that allows players to literally be their avatar as they scavenge for loot. The announce trailer gives just a hint of the kind of vivid experience PC players can expect, roaming around the world of Pandora and encountering all its inhabitants closer than ever before.

New content has been added, including a slo-mo skill called Bad Ass Mega Fun Time (aka BAMF Time) that is designed to allow players time to set up their next attack if their facing a particularly scary foe. The menus and UI have been remade to be as intuitive as possible, so building your load-outs is still as stream-lined and fun as before. Going by the teaser, gameplay is as quick and action-packed as everyone has come to expect from the Borderlands series.

Between this and Borderlands 3, the series is riding high at the moment. Evidently Gearbox has made good use of the four year gap since Borderlands: The Pre-Sequel. Delivering a mainline instalment and a robust VR port means there’s something for whatever platform vault-hunting aficionados and new-comers alike wish to choose.

Indeed, one of the producers discussed with us at Gamescom the value of waiting until the studio had something to really deliver before announcing anything. Sure enough, Gearbox has generated a lot of buzz for the game – we just hope it can live up to the ravenous fan expectations it faces.

You can dive in to the virtual Pandora when the game is released – watch this space.