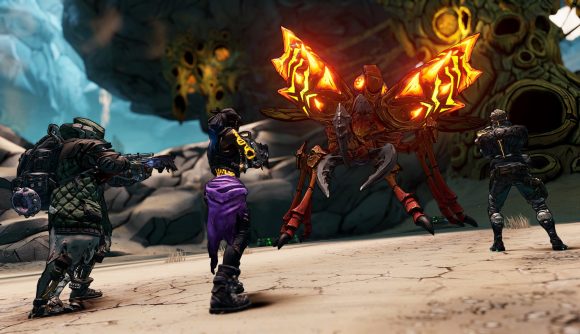 Gearbox has unveiled the release date for the Borderlands 3 Director’s Cut, as well as some new details about what we can expect to find in the new bundle of content. The Director’s Cut launches March 18, and it’ll be adding some new activities and loot to chase in the co-op FPS game.

The biggest new addition in the Director’s Cut is a new raid boss named Hemovorous the Invincible, a gigantic varkid that’s been hiding beneath a locked door that’s been dormant on Pandora since the launch of Borderlands 3. “Only the fiercest big game hunters have a chance of kicking her chitinous butt in the pursuit of top-tier loot”, Gearbox says. “Better consider your tactics, refine your build, and bring some friends. Oh, and be ready to get caked in Varkid guts – it’s going to get messy!” Nice.

The Director’s Cut will also introduce a series of new murder mystery missions, which take place in new locations and will feature a new ‘crime scene analysis mechanic.’ Gearbox hasn’t said more than that about the system, but it does say that the mysteries will form the basis for Ava’s new podcast about supernatural homicides.

Players who own the Director’s Cut – which is part of the Season Pass 2 DLC – will also get access to three timed vault cards. These are essentially season passes that contain more than 100 challenges to complete, pulled at random for daily and weekly tasks. Leveling the cards up enough will grant access to a “massive cache of themed cosmetics, plus some supremely powerful gear that scales to your level”, Gearbox says.

If you haven’t bought the Season 2 pass, don’t worry: Borderlands 3 is holding its annual Valentines-themed ‘Broken Hearts Day’ free event again this year. That starts up February 11 and runs until February 25, and it’s a chance to earn special themed rewards by shooting the hearts you’ll see floating around “lovesick enemies.”