I usually find three things when playing a Borderlands game. First: visiting Pandora in any of the series’ iterations means shooting your way through whatever until you find a gun that either completes your build or inspires you to tear it apart and forge a new one. It’s blissfully simple, and best enjoyed with a friend that’s online or next to you on the couch.

Secondly: you follow the story to a vault filled with super loot and brush aside whatever baddie is standing in your way. The series’ villains are fine for giving you a reason to do more looting and shooting, but I don’t think one has stuck with me other than Handsome Jack from Borderlands 2. Finally, I expect a myriad of jokes and pop culture references that’ll make me chuckle – or sigh.

Borderlands 3’s core campaign has all of that. It feels at its best moment-to-moment, when I’m pillaging foes for loot and tossing aside my gun for a new favourite that combines a bonkers combination of perks. The fact that one of your weapons literally fires out more guns is a sign that Gearbox is just as aware of what Borderlands has become.

Main baddies Troy and Tyreen Calypso are shock jock influencers that reflect changes in the media landscape since Borderlands 2, but the game stops short of taking a view on whether that change is a good thing or not. There are also, of course, gags and pop culture references. At one point, a character inspired by The Room director Tommy Wiseau pops up with an iteration of his “oh, hi Mark” line in tow – sigh.

Borderlands 3’s second piece of DLC, Guns, Love, and Tentacles: The Marriage of Wainwright & Hammerlock, is looking like more of the same, based on my 90 minutes of playtime. Depending on who you are, that’ll either be music to your ears or white noise.

The story is straightforward. Sir Alistair Hammerlock and Wainwright Jacobs are set to tie the knot, and we’re all invited. So I head to a new planet named Xylourgos to find a barren wasteland covered in ice and snow. 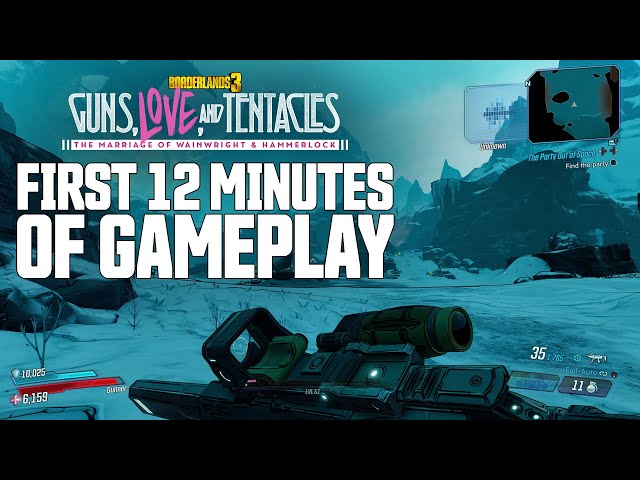 Before the story takes off I’m swiftly reminded of how unpredictable Borderlands 3 feels to play. It’s great. Thanks to the perks on my weapons and the way I’ve built my vault hunter, Zane the Operative, every fight is chaos. One of my Operative perks means that there’s a decent chance I’ll fire a grenade instead of a bullet, and landing a headshot with a pistol gives a chance for it to ricochet and hit someone else.

I’m reminded of how random this all is when a mission asks me to hit a target to divert power to a generator. I end up firing a grenade in its direction instead (it still worked).

Other loot shooters like Destiny allow me to be precious and calculated with my character builds. Borderlands is happy to let me tinker with my vault hunter set-up, but reminds me that sometimes it’s best to go with the flow. Seeing a gun drop after a bandit falls is always exciting as there’s every chance it’ll be a weapon I’ll keep with me until the credits roll. As Borderlands 3’s second helping of DLC brings more gear, legendaries, and class mods, I’m already happy to spend more time in Pandora if it offers more opportunity for loot.

Guns, Love, and Tentacles also builds on the more inclusive elements of Borderlands 3’s story. The core campaign quietly made it clear that a selection of its cast was queer or nonbinary. The marriage of Wainwright and Hammerlock is front and centre here, clearly, but there are many more subtle moments that deliver some unexpected charm.

After you touch down on Xylourgos you make your way to a lodge, before Hammerlocks sends you to find Wainwright. He hasn’t returned to the lodge yet as he wants to scout the wedding venue to make sure it’s just right – all part of the pre-marriage jitters. I know this, as I share a walk with him as he airs his thoughts. It remains to be seen, however, if Borderlands 3’s new DLC avoids tripping over its toilet humour. 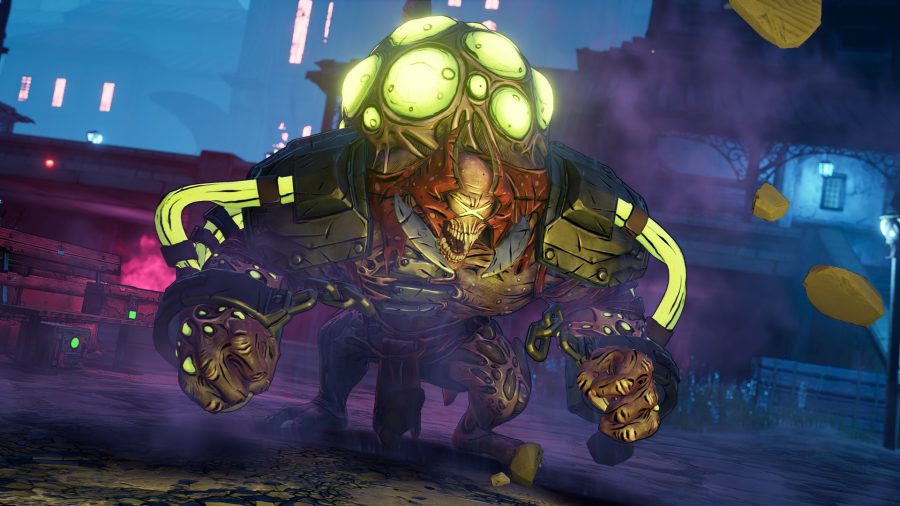 Other aspects of Borderlands 3’s humour remain flat. As I make my way to the lodge, Xylourgos shifts from a frozen wasteland to an eerie Victorian hamlet. A scenery-chewing hotelier greets us, dialing the creepy concierge archetype up to 11 and foreshadowing that things are about to go awry with all the subtlety of a brick. Sure, this being a shooter, this marriage getaway was never going to go smoothly but I could’ve done without Lurch from the Addams Family telling me so.

Select: All the Borderlands 3 Vault Hunters you can choose from

There are dollops of fan service, too. Gaige and Deathtrap from Borderlands 2 return as wedding planners, and Claptrap is back. As soon as Claptrap is introduced, however, he’s sent away again, which may put some of you at ease.

Borderlands 3’s next piece of DLC looks promising. It’s heartening to see the series put a queer story at the heart of its narrative, provided that it doesn’t trip over the series’ South Park-style of toilet humour (there was some cause to raise eyebrows around this point when the base game launched). And hey, it’s another chance to indulge in the game’s moreish loop of nipping baddies for guns. So far there’s not a lot else that it’s doing differently when it comes to gameplay, but why fix things that aren’t broken?