Pandora can be a lonely place, especially when Borderlands 3 only unlocked at midnight and your friends all have work in the morning. It’s ok though. I don’t need them. Because on my latest trip to Pandora I’ve got Fl4k and his menagerie of animal companions.

My previous sorties in Borderlands were defined by my love of turrets. In Borderlands 1, I’d throw Roland’s Scorpio Turret down and bask in its healing aura. In Borderlands 2, I levelled Axton to the point where I could drop down two rocket-spewing guns and once, and then let my mechanical friend mow down everything that stood in my way.

But that was seven years ago, and it’s now much more difficult to get my original band of adventurers together. As such, I’m preparing to do at least one Borderlands 3 playthrough more-or-less on my own. And with turrets far from being the most important tools in the new Vault Hunters’ shed, I’ve had to find a new way to get something else to do my killing for me.

Enter Fl4k, the Beastmaster. This grumpy robot may not be the most charismatic of the new arrivals, but he does have something that Amara, Moze, and Zane don’t: A whole bunch of pets that he can call on to help him out in battle.

As well as an Action Skill, Fl4k can decide whether he wants to be joined in his quest by a vomit-spewing skag, a headbutt-happy Spiderant, or a pistol-wielding Jabber. As well as acting as an extra source of damage (and an extra source of aggro for your enemies’ bullets), each pet offers benefits that make playing alone significantly less punishing.

Within Fl4k’s skill tree, you can use Gamma Burst to opt for a health-regeneration build that offsets damage you take to your pet and heals you every time your companion deals damage. With Rakk Attack, you can turn yourself into a self-sufficient sniper, relying on your Spiderant and waves of angry birds to keep your health topped up if you’re ever in a tight spot. And with Fade Away, you can make the Beastmaster into a bullet sponge, with massive reserves of health, and the added bonuses of being able to slip out of a fight at by turning invisible and training your pet to revive you if you’re knocked down. 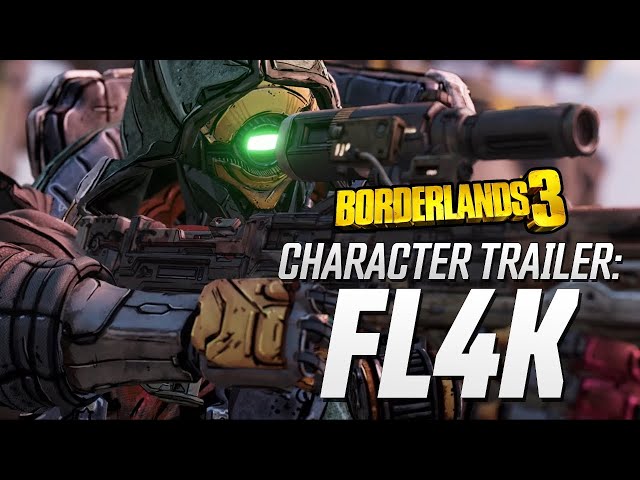 However you build Fl4k, he seems to be the perfect fit for solo play, letting your partner handle the DPS and letting you focus on keeping yourself alive. Sure, this time around my companions are significantly less mechanical than before, but as long as I can point at an enemy and have them be torn limb from limb by an angry mutant dog, that difference seems pretty trivial.

There’s no doubt that Fl4k’s beasts make him one of Borderlands’ most self-sufficient Vault Hunters ever, but in my early hours with the game, they offer something else too. Time spent sprinting mindlessly around Pandora with my friends remains one of my fondest gaming memories, and while it’s strange to be returning after all these years without them, it’s nice to still have something fighting at my side (and yes, you can pet the skag).

While we’ll be covering Borderlands 3 in as much detail as possible over the coming months, we received codes too late to publish a review in time for embargo.