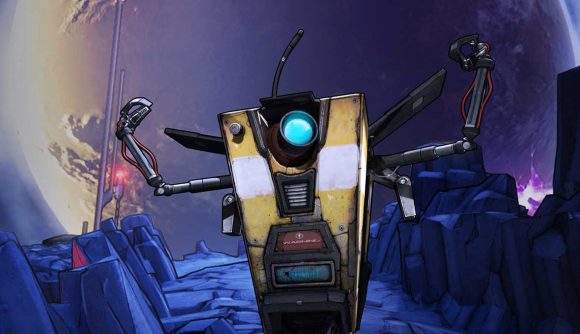 A Borderlands movie has been in development for years, and while we’re still a long way from any concrete details on the film, that hasn’t stopped fans – and the developers at Gearbox – from speculating on who should portray the game’s cast of characters. Some of the Borderlands devs have weighed in on the best choice to play Claptrap, and the answers are diverse to say the least.

According to Borderlands creative director Paul Sage, Dwayne Johnson is the only right choice for the endearingly annoying bot. “Who could play Claptrap? Our audio guys would tell you, ‘Hey, we can make anybody Claptrap!’ I think The Rock,” Sage tells VG247. “Yeah, The Rock has to play Claptrap!”

Art director Scott Kester agrees, but only if the actor was in full costume as Claptrap. Otherwise, Kester has a different idea. “I’m gonna go with Bill Murray. Yeah! That’s who I want to play Claptrap. Maybe he’d finally get an Oscar.”

The Rock is clearly cool with videogame adaptations, since he starred in Rampage just last year, though having to appear in a robot suit might be a dealbreaker.

The Borderlands 3 release date is set for September 13, and you can follow that link for much more on what to expect from the game. As for the Borderlands movie, it remains to be seen when (or even if) it’ll launch, but for now we can rest assured the devs are pushing for a strong cast.