This isn’t Borderlands 3. This is Borderlands One and a Half, an interim, standalone adventure that takes place between the first and second games. It’s being developed by 2K Australia with help from Gearbox (who are also busily working on their own new IP), will use the Borderlands 2 engine and will not be coming to next-gen consoles.

It’s a whole lot more Borderlands, just expanded outwards rather than upwards. You’ll play as one of four new characters —one of whom is the sardonic robo-sidekick Claptrap — in a quest to assist Handsome Jack’s rise to power and set the scene for the beginning of Borderlands 2. It also takes place, largely, on Pandora’s ever-visible but until now inaccessible moon.

They’ve actually called it Borderlands: The Pre-Sequel, bless them.

Foremost, this appears to be more a substantial piece of standalone DLC than a properly new chapter in the Borderlands series, and as such you can take many things as read. It’s four-way co-op, there’s loot and procedurally generated weapons, boss fights and levelling up and skill trees. There are quests and there is humour and there’s exploration. At its roots this is the Borderlands you know. 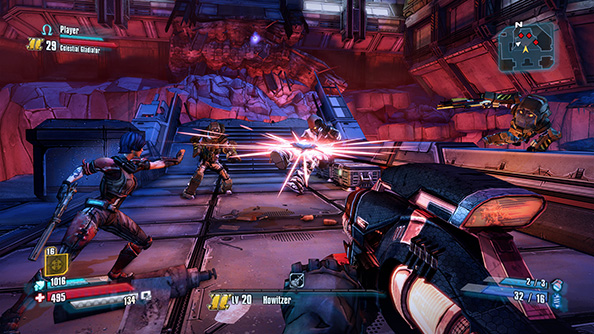 But of course, because it’s largely set on the moon of Pandora, there’s a slew of new things to see and do and behold and consider. Oxygen is now a resource to be managed, and so 2K Australia have introduced all new Oz Kits (a clever play on how ‘O2’ looks when written down and the first of many, many references to the game’s new Aussie-centric development team).

Oz Kits grant you a supply of air to be used when on the atmosphereless surface, as well as the use of a jetpack. Combined with the moon’s low gravity, the jetpack gives you super mobility at the expense of a few extra lungfuls of air. Enemies on the moon’s surface will have their own Oz Kits, shimmering translucent helmets that can be shot and disabled, suffocating their owners. 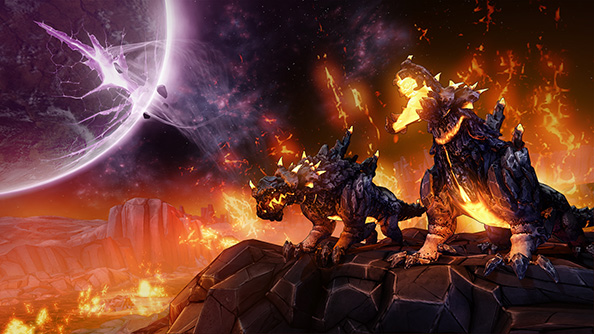 These kits also give you a groundpound ability, damaging enemies beneath you. Some new elemental effects have been added, such as ice and freezing damage. Ice bullets can turn enemies into frozen statues, which can be barged through and shattered into a thousand physics-enabled shards.

Some examples of Oz Kits loaded with this new effect were demonstrated to us: a groundpound that froze everything within a given radius, another that generated a bubble of O2 around the landing site, which in turn allows you to temporarily use fire-based weapons. Fire, after all, doesn’t work in a vacuum. Laser weapons have been thrown in too. Beam weapons deliver a constant stream of charged particles akin to Ghostbusters style proton packs, while some more Star Warsy styled laser rifles fire off blasts with satisfying pew pew noises. 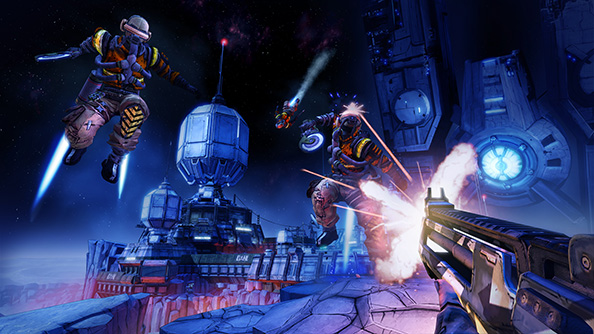 The first of the four new characters is Wilhelm, who appeared as the first boss in Borderlands 2. In that game he was a cyborgian monstrosity, here he starts out human and becomes increasingly robotic as you unlock skills and level him up. Secondly there’s Nisha, another returning character from Borderlands 2 of whom 2K Australia are revealing not a jot. Claptrap is the third, appearing only briefly in the demonstration playthrough and giddily described by Randy Pitchford as having a camera viewpoint that’s quite low to the ground.

Athena was the character most explored in the reveal. Her action skill is essentially Captain America’s shield, a weapon called the Kinetic Apsis that can be used to absorb enemy fire for a few moments, charging up with energy before it’s chucked back at a foe. Her skill tree gradually upgrades the shield, with the final skill allowing the charged shield to ricochet off four different enemies at once. She’s an effective tank in co-op, with a few more abilities shown that help her aggro groups of enemies and draw them towards her. 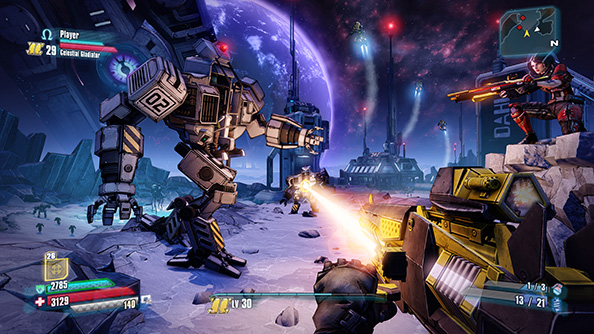 What else? Meteors randomly strike the moon’s surface and can subsequently be looted. Sometimes loot floats away in low-gravity, which is fun. Explosive weapons and grenades now send corpses tumbling off into space, which is very fun. 2K Australia promise that they’ve embedded a variety of unique environments into the moonscape, that it won’t all be craters and bleakness, and even hinted that the Pandoran satellite won’t be the only setting that the game explores.

Borderlands: The Pre-Sequel ties together the events of the first and second games for anybody who was paying attention to the plot, and seems to be going about it in a clever enough way. So while we’re not getting anything close to what you could comfortably describe as a new thing, we are getting a fulsome stand-alone Borderlands 2 expansion with an endearing and fresh Australian bent.

It’s telling that this isn’t coming to next-gen consoles, a decision that firmly places this project in the appendix of the current-gen Borderlands series, perhaps as a chunk of DLC that got a little too big for its boots. Either way you cut it, it’s more Borderlands for you. Lots more Borderlands. More and more forever until people decide to stop buying Borderlands games, which might not be for a while because, hey, Borderlands games are pretty good aren’t they?

This one comes out on PC some time later this year. ‘Fall 2014’, says the email.