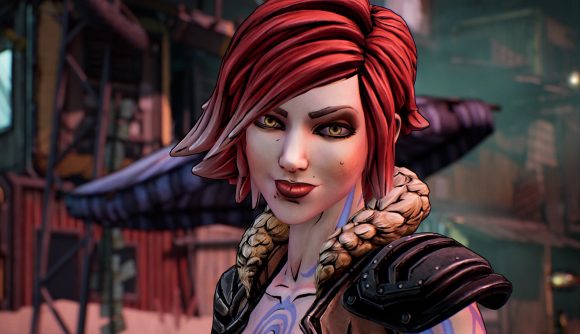 We’ll be honest: we had pretty much given up on the idea of a Borderlands movie back in 2016, the last time we heard anything substantial about it. But as it turns out, the project is still moving along, and has attracted some major Hollywood talent.

Variety reports on sources who claim Oscar-winning Australian actress Cate Blanchett is currently in talks to play the role of Commander Lilith in the screen adaptation of Gearbox’s anarchic sci-fi games, which both established the popular loot-shooter genre and coined the phrase ‘Butt Stallion,’ for which we are eternally whatever the opposite of ‘grateful’ is.

Gearbox CEO Randy Pitchford is an executive producer on the project, and Variety reports that Eli Roth (Hostel, Cabin Fever) is now attached as director. Father-son duo Avi and Ari Arad (who also produced the upcoming Uncharted movie) are still listed as producers for the film.

Additionally, since we last checked in, the film has a new writer – Variety reports that Emmy-winning Chernobyl writer Craig Mazin has completed the latest draft of the Borderlands screenplay.

There’s no official confirmation that Blanchett has accepted the role of Lilith, but Gearbox appears fairly excited about the possibility on Twitter:

We are incredibly excited about this news! Borderlands is shaping up to be an amazing movie!https://t.co/42VT8YUQkc pic.twitter.com/zJY7M7B5to

So does this mean a Borderlands movie is moving out of the theoretical realm and closer to actual reality? It sure seems so, but any number of things can happen on the way to full production.

In the meantime, you’ve got the new Mayhem 2.0 gear rework for the Borderlands 3 endgame now. That update launched April 23, and brought with it the Sand Hawk sniper rifle from Borderlands 2.