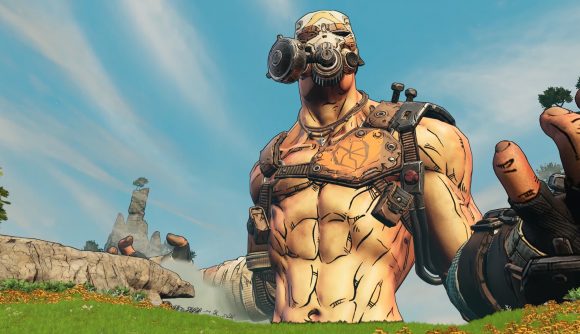 The forthcoming Borderlands movie now has its Krieg. Florian Munteanu, the former professional boxer who played Viktor Drago in Creed II, will reportedly play the sometimes-loveable psycho in Eli Roth’s film adaptation of the Borderlands franchise.

According to a report by The Hollywood Reporter, Munteanu is in “final negotiations” to join the cast of Borderlands, which already includes A-list talent including the likes of Cate Blanchett, Jamie Lee Curtis, Kevin Hart, Jack Black, and 13-year-old Arianna Greenblatt (who’s taking on the role of Krieg’s explosives-obsessed ward Tiny Tina). Since turning to acting, Munteanu has also played the character Razor Fist in Marvel’s Shang-Chi and the Legend of the Ten Rings, which is set to debut this summer.

Krieg’s appearances in Borderlands to date have not featured a lot of what you would normally call ‘dialogue’ – the hulking psycho primarily communicates through a variety of screams, grunts, and unintelligible jabbering – at least up until his Borderlands 3 DLC storyline, Psycho Krieg and the Fantastic Fustercluck. But that doesn’t set him apart from the rest of the Borderlands crew by all that much, come to think of it.

As improbably as Krieg is rendered in the Borderlands games, Munteanu has managed to build the physique for the role. He’s a big lad.

He seems excited about the role, too:

Here we go. So hyped for this one. Fell in love with the role immediately once I had my eyes on it. Can't wait to bring Krieg🪓 to life.
LET'S ROOOOOOOOLL 🔥🧨🧨🔥
.#anotherone #boderlands #krieg pic.twitter.com/mIc5zhwKzT

Production on Borderlands is set to begin in April and will begin shooting in Hungary. There’s no official release date set for the film as yet.

In the meantime, have a look at our list of the very best FPS games you can play on PC.