A couple of hours into Bound By Flame, Spiders’ latest RPG outing, I was assaulted by deja vu. At first I chalked it up to the game’s reliance on all manner of tired fantasy troops from busty witches to evil necromancers intent on destroying the world. That wasn’t it, though. There was something else clawing at the back of my mind.

Then it came to me. This is Mars: War Logs – Spiders’ previous RPG – with the science fiction setting swapped out for a trite fantasy one. And that’s rather unfortunate, because Mars: War Logs was rife with problems from appalling writing to frustrating combat. Bound By Flame improves on few of its forebearer’s issues and is hampered by an utterly forgettable setting.

Spiders is an ambitious developer. It draws inspiration from RPG titans like Dragon Age and The Witcher, but Bound By Flame lacks any of the polish or nuance that those titles contain. You can teach a parrot to spout some phrases, but you’re not going to get a scintillating conversation out of the bird.

The world of Vertiel is about to be destroyed. It’s hard to care about the fate of a fantasy realm so devoid of personality. Only three areas in it are visited: a gloomy swamp, a gloomy derelict city and a gloomy derelict fortress. There are other lands, though. Of that I’m certain. Occasionally a character will mention them very briefly in a half-hearted attempt to flesh out the world. It doesn’t work. It’s as bare-boned as the undead enemies. 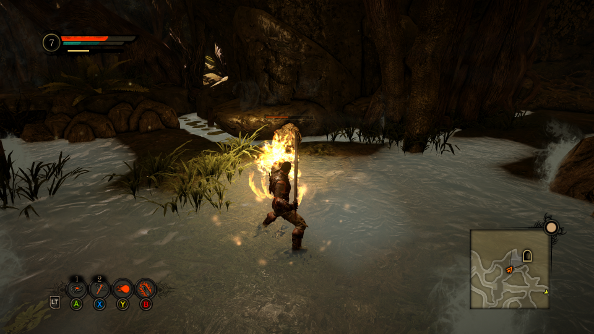 To cut a long, boring, story short, he ends up sharing his body with a demon of fire and has to go on a quest to stop the Ice Lords – the aforementioned necromancers. Bound By Flames’ adherence to the dullest of fantasy tropes is made all the more unpleasant with its inability to even do them justice. Mostly absent, entirely underwhelming villains; a bullish, dull “anti-hero” in name only; and a party of adventurers that have less presence than cardboard cutouts – there’s almost nothing remotely appealing about the narrative.

Which makes the game’s handling of the demon living inside Vulcan quite surprising. Spiders has integrated the alien presence fighting to control the hero into every aspect of the game. And for the most part, the studio has done so deftly.

Ostensibly, the demon is Bound By Flame’s morality system. Moral choices are posed, and the route Vulcan takes makes the battle for his body go one way or the other.The choices themselves are large, but binary and clear black and white affairs. Take the demon’s advice in a situation, and Vulcan loses his humanity; ignore the demon, and he keeps his humanity. In that regard, it’s disappointing, but the impact the choices have on the rest of the game are significant.

The most obvious effect of Vulcan being a naughty boy is the Fable-like mutation of his body. The more he gives into the demon, the more he looks like one himself. At first his skin grows ashen and his eyes burn with an unnatural intensity, then horns appear and his flesh burns and cracks. It’s a dramatic transformation, and one that is more than an aesthetic change. 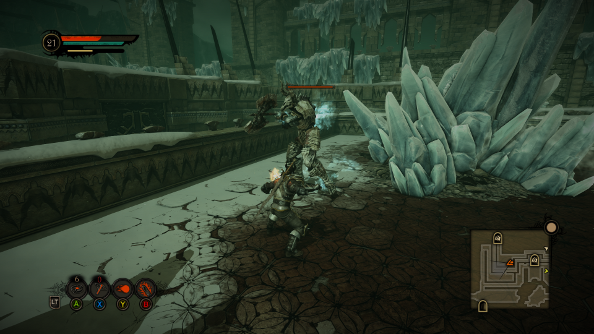 Vulcan’s horns preclude him from wearing helmets and the ferocious heat generated by the flames that dance around his flesh melts his armour. This weakens his armour and his ability to deal with attacks, and the absence of a helmet leaves him without the many statistical bonuses that extra piece of armour provides.

The payoff is an increased affinity for fire magic. His merging with the demon near the beginning of the game adds a third ability tree on top of his more mundane skills. The first two trees deal with his proficiency with a broadsword, a slow, defensive weapon with large swinging arcs, and his skill with daggers and stealth. The demonic tree, pyromancy, deals with a myriad of infernal spells. Vulcan can launch fireballs at enemies, wreath himself in flame and coat his blade with fire. The stronger his pact with the demon, the greater his powers. It’s just unfortunate that, as flashy as the pyromancy techniques are, most of them aren’t very effective.

The gaggle of NPC companions react to Vulcan embracing or denouncing his demonic passenger, as well. They question his humanity and if he is truly in control, and some of them won’t be best pleased by the choices he makes. Yet it’s hard to care about what they think. His chums are a singularly dismal bunch of characters, scraping the barrel of stereotypes from the aforementioned buxom witch to the stalwart warrior with a tragic – barely touched upon, mind you – past. 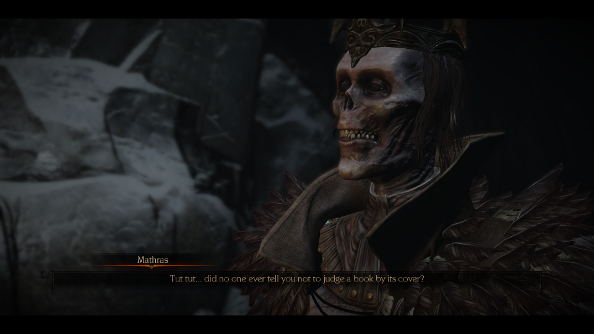 Neither the text itself nor the voice acting bring these characters to life, and horror of horrors, there’s the potential for romance. Mars: War Logs shoehorned in this “feature” as well. The game thrusts Vulcan and one of his cohorts together absent courtship, character development or any hint that before these two people inexplicably knock boots (at least I think that happens, it cuts away the moment it’s implied) they were remotely interested in each other.

Companions are no better in combat. They can only be given the most basic of orders, there’s no way to customise them and they seem to be entirely incapable of helping at all. Sybil, a beige librarian, can heal a little bit, making her really the one companion worth even considering. The others appear to be mere illusions, barely touching enemies and dying at the drop of a hat.

In one particularly trying and long battle – though that really could describe 50 percent of Bound By Flame’s violent encounters – I left my companion to deal with some minor foes while I tackled the boss. A few minutes later, I noticed that not one of the enemies had been defeated, and when I checked their health I noted that no damage had been done. Companions are nothing more than a distraction for enemies. 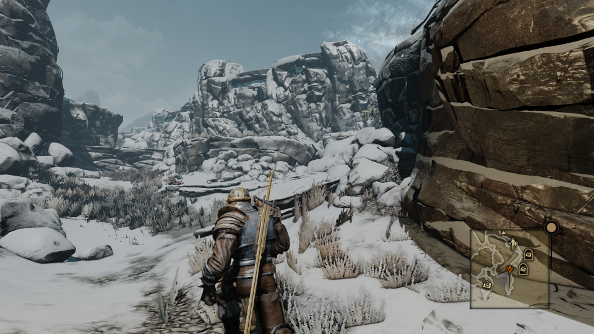 Battles themselves are frustrating. The fighting mechanics are actually fine. Good, even. It’s easy to switch between magic, swords and daggers quickly; blocking, parrying and dodging is effective but requires good timing; and while some attacks can be painfully slow, they can be cancelled for an evasive or defensive manoeuvre.

If you’re thinking, “none of this sounds frustrating,” then you’d be right. It’s not Vulcan, but rather the enemies that make each and every conflict in Bound By Flame a test of one’s patience.

The small amount of foes are almost exclusively mindless zombies. There’s the occasional oversized insect or boss, but the undead are everywhere. And gosh are they terrible. Slow, with simple attack patterns and tons of health. Fights are wars of attrition, even against basic enemies, and they are almost always able to do more damage than Vulcan. 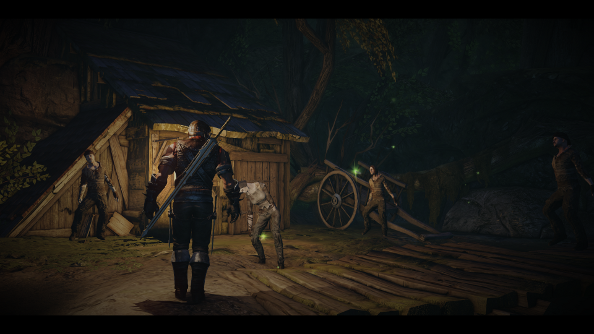 Absurd difficulty spikes make combat even more of a chore. There appears to be no thought given to balance, and it’s common to face mixed squads of archers, heavily armoured warriors and spellcasters all at once. After almost 60 hours of Dark Souls II, I’m no stranger to death. But at least there I died because I made a mistake and was only too happy to try again. In Bound By Flame, a repeated battle is a punishment, not a learning experience.

Poor hit detection, archers being able to occasionally fire in the opposite direction they are facing and insta-kill spells serve to make matters even worse. Perhaps the most frustrating bit of design is the MMO-style loss of aggro. Move too far away from where an enemy spawned, and they will run back to where the fight started and heal immediately. Since Bound By Flame’s scraps are highly mobile brawls, this becomes a serious problem.

It’s an action RPG, and the action simply isn’t good. 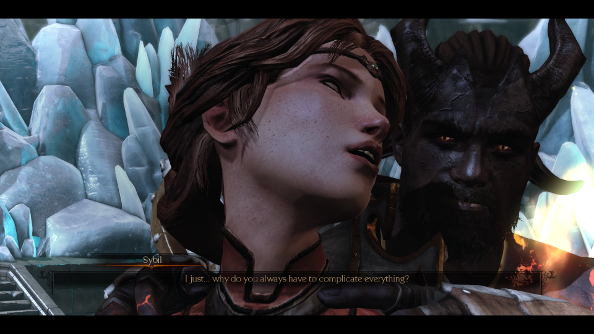 When I had that realisation, everything else just started to fall apart. It’s the core of the game, so all the ancillary stuff suffers. Even robust the crafting system. It promotes a thrifty, pack rat mentality and forces hard decisions like choosing between upgrading armour or building more traps and recycling armour for parts or selling it for gold. Greater meaning is given to the list of random bits of junk in the inventory screen. But it loses its charm because its worth is devalued by the combat encounters that are not improved by its inclusion.

Yet that system, and the implementation of Vulcan’s fiery chum, shows that Spiders can do better than this. There are glimmers, however faint, that suggest that were Bound in Flames more focused and less concerned with how recent big budget RPGs have gone about their business, it could have offered an extremely interesting diversion. But its mimicry of titles built on top of piles of money has done it no favours.

With its awful characters, inconsistent voice acting and combat hampered by problematic enemies, what little there is to enjoy is whittled away. It’s something to be tasted when absolutely starved for RPGs and could provide enough sword and sorcery shenanigans to tide one over until something more appetizing comes along, but it’s unlikely to prove fulfilling.