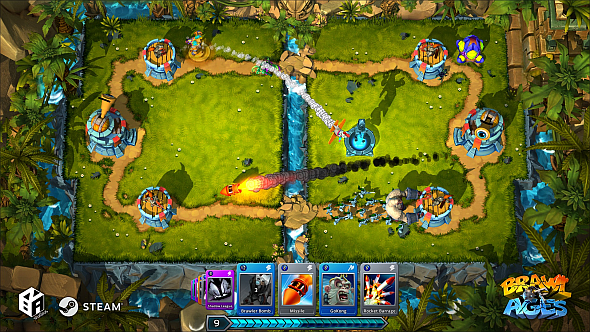 Collectible card arena (CCA) games are becoming A Thing. Starting on mobile with games like Clash Royale and Smite: Rivals, they combine elements of tower defence, MOBA and card battle games. Typically, you’ll build a deck of cards and play them into a lane-based battle arena, with the objective of defending your base and destroying your opponent’s.

If your fun is even more fun when it’s free fun, you’ll have the most fun with the best free games on PC.

That pretty much describes Brawl of Ages, the new CCA developed by BNA Studios and published by S2 Games, the guys who brought you Heroes of Newerth. With Smite Rivals now on hold, Brawl of Ages will be one of the few CCAs made for PC from the ground up.

In Brawl of Ages, you’ll build and play a deck of ten cards. Some can represent units and spells with which to attack enemies, or buildings and totems that will defend your base. You’ll then be dropped into a two-lane battle arena to face an opponent in real time.

The game is available on Steam early access now, and follows a free-to-play/microtransactions model. Naturally, then, you can grind out a free currency to unlock new cards or get there quicker with a real-money currency, and there’s a ranking up system too.

Brawl of Ages currently offers a season-based ladder mode; a ‘conquest’ mode (in which you need to win ten games before you lose three, with successive wins dropping bigger rewards); and ‘brawl club’, in which you can create and join clubs of up to 50 players to chat and challenge others.

“As we developed Brawl of Ages and took feedback from the closed beta, we were inspired by several RTS, MOBA, RPG and Tower Defense games as we wanted to hit the key features of these games with none of the drawbacks typically found in these genres,” says Marc DeForest, CEO of S2 Games. “Brawl of Ages was designed with casual and competitive gamers in mind so players can quickly enjoy an intense action-strategy game or dig deeper and create unique decks and strategies as they rank up over time.”

A full commercial launch, with new features, modes and other content, is due later this year. For more information, check out the website.