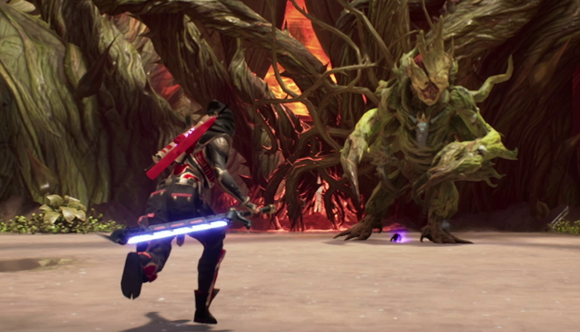 A bunch of ex-Bioware staff are working on a brand new co-op-focused RPG called Breach, with the intent on “revitalizing the genre.” It’s set on a modern day Earth which has collided with “a parallel Mythological Earth”, and most importantly, you get to fight an evil version of Groot from Marvel’s Guardians of the Galaxy.

Breach has already been in development for three years with the new team at QC Games, with a planned Early Access release this year and a full free-to-play release in 2019. The studio is led by CEO Dallas Dickinson and Game Director/CCO Gabe Amatangelo, both formerly of BioWare who worked on titles such as Star Wars: The Old Republic, the Dragon Age games, and the unreleased Shadow Realms – which Breach seems more than a little influenced by.

We spoke with Dallas Dickinson at Gamescom, and he compared Breach to Valve’s sublime Left 4 Dead 2 – a game we compared Shadows Realms to, incidentally. “It kind of has the same feel to it.” Despite the co-op focus Breach can be played solo, at least. “The idea is to play it however you want, you’ll be able to find fun whether you want to play with other people, or nobody!”

The story behind Breach is that 70,000 years ago, humanity was on the brink of extinction until a group of Immortals created two Earths – the one we live on, and a place for all mythological creatures. Now, one of these Immortals is forcing these worlds to collide. “The last 100-200 years of humanity have not impressed him,” Dickinson tells us. “He thinks that we’re destroying everything, and he thinks he made a huge mistake [splitting the Earths up] and he’s going to undo what he did.”

Which involves the players facing off against all manner of mythical creatures of course, in third-person action-RPG combat. There are “dozens” of classes, and players can change between these at any time. You can check out a few of these in the trailer below, including a Gunslinger who mixes magic with gunplay and a Chronomancer who messes around with time.

As for the evil Groot, who you probably got a glimpse of in the video, it’s actually a Leshy, “a tree spirit which has absorbed a human being” from Eastern European myths, according to Dickinson. It’s actually the real-world basis for The Witcher 3’s popular Leshen forest creature. Other notable enemies include the Baba Yaga and the Kikimora, a half-chicken hag spirit. “It’s weird,” Dickinson says. We quite agree.