There’s still time to buy the GMK Pretty in Pink mod extension keycap set – a collection of modifier keys to show support for those fighting breast cancer and raise awareness. Available from NovelKeys for $45 until October 31, 2019, all profits will be donated to the Breast Cancer Research Foundation.

Featuring a collection of both marked and unmarked keys for space, enter, arrow keys, shift, tab, super, and function keys in splendiferous custom pink hue and adorned with WS1 white script, the Pretty in Pink set also offers an alternative esc key featuring the pink ribbon – a symbol recognised worldwide that has been crucial in raising awareness for breast cancer. Both ISO and ANSI enter keys are included within the set for UK/US layouts.

There’s also an enter key brandishing the word “Hope” across it, and a key featuring a four heart flower. With modifier keys of varying length, there are a number of combinations possible for any compatible Cherry MX stem keyboard – which just about covers the majority of the best gaming keyboards we recommend.

Most non-mechanical, Logitech, and Topre boards will not be compatible with these keycaps, so make sure to check the exact fitting before purchasing. 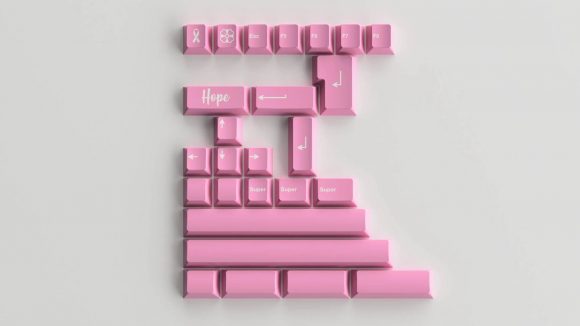 The set is produced by GMK and utilises doubleshot ABS, and the final result should be sturdy and retain its legend longer than cheaper keys.

The Pretty in Pink keycap mod extension kit is available in a group buy (similar to Kickstarter or any other crowd-funding platform) and aren’t due to be shipped until April 2020.