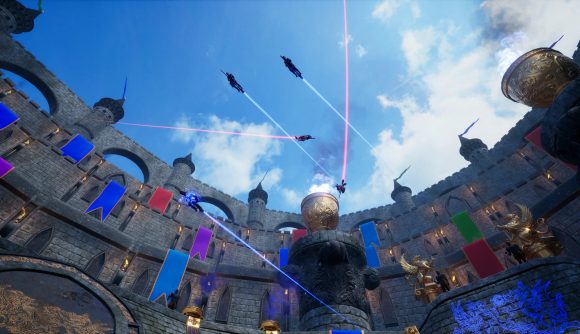 If you’re a Harry Potter fan who has enjoyed the action of Rocket League, you might want to sit down for this: Broomstick League is a 3v3 soccer match played by broomstick-riding wizards, and it’s hitting early access on Steam Thursday.

On the surface, Broomstick League looks a lot like Quidditch – there are the two teams facing off over a large arena, with players astride flying brooms. There are goal nets on either side, and the idea is to score points by launching a ball into these goals. However, Broomstick League strips the game down to its essentials. It features teams of three, and rather than keeping track of your role or buzzing around after a Golden Snitch, everyone in Broomstick League is focused on scoring – and on styling on their opponents.

The ability to soar and whip around in the air sets Broomstick League apart from its earthbound cousin Rocket League (although, in fairness, there’s a mod for that). The brooms are remarkably agile, allowing you to divebomb, roll, and dash around in flight. You can grab the ball with a ‘ball magnet’ ability, and then charge up for a shot on the goal.

Being that everyone is a powerful wizard, you have a suite of athletic spells to bring to bear on the field. There’s a blink ability that allows you to teleport yourself instantly, which opens up the possibility of spectacular defensive plays. The air dash can help you pick the ball up first on a face-off, while a blast spell can be used to knock the ball out of opponents’ hands or just get them to veer off course.

Top that off with some wand-based taunts, and you’ve got all the ingredients for a rather entertaining potion.

Broomstick League will be available March 5 in early access on Steam, so you can head over to the Steam page for more information and pricing.