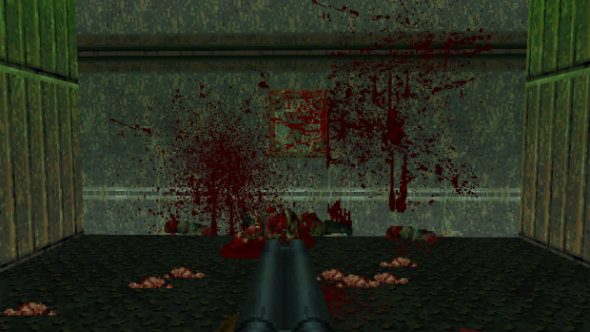 You can check the changes out in the video above, but do read on for a basic overview.

Fond of the classics? Check out our list of the best old games.

One of the update’s main additions is a new kick ability, which works just like the kick in the original Brutal Doom. You can boot any demons who get up in your grill, and you can also jump kick demons right in their grill to repay the favour. To stop you spamming the kick, there’s also a new stamina system that will stop you being able to throw out your leg for a while, just in case you go full Bruce Lee.

Elsewhere, the chaingun has been buffed and now fires much faster. There’s also a new assault rifle weapon that you have to fire in controlled bursts, otherwise its shots will just go absolutely everywhere other than a demon’s noggin.

Perhaps the biggest addition though, is tactical mode, selectable when starting a new game. Here you can sprint, but your base movement is slower than in vanilla mode. Weapons also need reloading here. There are multiple other tweaks to how certain weapons function in this mode, too, and you can see them all in that video up there.

Original Story October 24, 2016: Brutal Doom 64 is coming out the day before Halloween, which is almost perfect for the gory FPS mod. The mod reworks Doom 64 with new effects, animations and a great deal more. You can see a trailer for it below.

New special effects, particles, lightning, gore, sounds, weapon animations – from shotgun reloads to smoother minigun barrels – all feature in the mod, along with cut content from the original Nintendo 64 version.

Brutal Doom 64 features the original game’s 32 levels, all filled with fan-favourite enemies, as well as some monsters that never made the cut -Chaingunguy, Revenant, and Mastermind have been confirmed so far.

So expect cut content, smoother animations and gore… buckets and buckets of gore.

The mod will work on GZDoom and Zandronum in OpenGL mode, and you can check it out on ModDB.