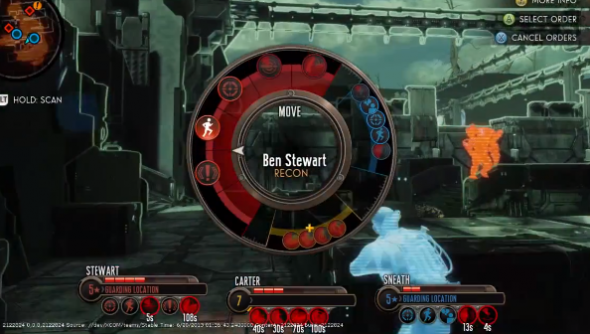 You may be one of many worried that The Bureau’s jump into third person shooty bang bang territory will mean its an XCOM game in box-art /Steam list title form only. Here to convince you otherwise is the uber-cool Morgan Gray, creative director of The Bureau. He’s got plenty of gameplay to show off, and it’s two cups tactical-wheel spinning to one cup ‘Headshot!’

Talking with Revision3’s Adam Sessler, Gray shows off fifteen minutes of footage from later on in the campaign than we previously saw at E3. We see Agent Carter along with his team equipped with backwards engineered laser tech, which Gray explains can be produced through the acquisition of schematics. Combat soon breaks out, and Gray spends a lot of time using the Battle Focus skill wheel, which enables many of the tactical options as seen in Enemy Unknown. Except it’s all in real-time-ish. Equivalents of cover, attack and overwatch seem to be available, and the maps have the wide-open feel of its turn-based brother’s.

It may not be the game everyone wanted, but The Bureau certainly has a strong link to XCOM Enemy Unknown, and has all the tools there for players to make the game a much more tactical experience than your regular cover shooters. Will it all come together in the end? We’ll all find out on August 23rd