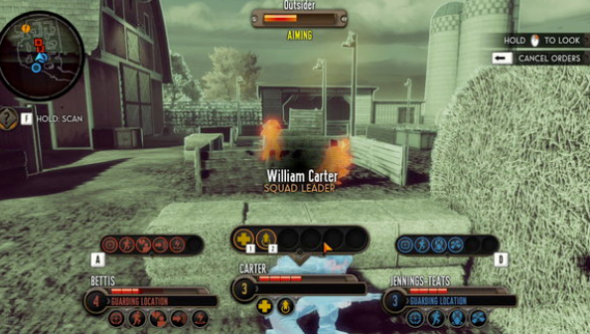 As we all know, the big key to XCOM is developing new equipment to make the battle ahead less hard work. It looks like that philosophy extends right to the core of The Bureau, as the development team have scrapped the radial command wheel from the PC version, opting for an MMO-like hotkey bar instead.

The radial wheel – as seen in games such as Mass Effect – is a fairly elegant solution to selecting from multiple options when multiple buttons are not available. Just like on a controller then. All you need with a wheel is a trigger button and an analogue stick to navigate. But on the PC we don’t have that kind of equipment. We have keys. Lots of keys. And we like to keep all of them exercised, so thankfully The Bureau is letting us use them to control our squad in the PC version.

It looks like number keys 1-6 will act as the main selections, with the icons for each action being shown in a horizontal bar rather than a screen-filling radial menu. The big pro point I see here is that your view isn’t taken up by the wheel now, making battlefield observation notably better. Shack News do point out though that the ‘move’ command is assigned to key 2 rather than 1, which may feel a little counter-intuitive since it’s probably the command you’ll use most. However a look at my keyboard shows that the 2 key is above the W key, and thus is quite the perfect area for quick switches between real-time running forward and paused movement commands. Alternatively, you could just use the mouse. Hooray for choice!

The Bureau is fast approaching release; it is due with us on the 23rd August. If you need some XCOM goodness right now, you can find Enemy Unknown – the more strategy-heavy older brother of The Bureau – in the Steam Sale today for a very agreeable price.