You’ve heard of Warhammer. Maybe you have a friend or two who’s tried it, and told you happy stories of weekend gaming sessions gathered around a table with a few beers, playing what is effectively a strategy game but with the added enhancements of eclectically painted plastic miniatures and, y’know, people. People are nice. One of my gaming friends once hit me in the face with Warhammer’s big red rulebook because I lost a bet.

Your friend is beckoning you down a rewarding path. Be warned: Warhammer can be an expensive hobby, but it’s a benevolent and wholesome one. It’s given me many happy memories, whether actually competing to win games or screwing around with silly home-brewed rules at a friend’s stag do. It’s also worth noting that painting those little plastic soldiers is seriously meditative; it’s remarkable how the rest of the world falls away when all your focus is at the tip of a paintbrush. The hobby can benefit you in obscure little ways which may surprise you.

But where to start? That’s where we come in. Consider the advice in our Warhammer buyer’s guide below, and you too can be hit in the face by rulebooks.

‘Buy this today’ is our list of brilliant stuff you could and probably should own. That includes games, hardware, tech, board games, toys, and more. For all of our product recommendations follow Buy This Today on Twitter…

Warhammer is a series of tabletop miniatures games by Games Workshop. Following the reboot of the original Warhammer Fantasy setting – where Total War: Warhammer among other videogames takes place – there are two main flavours: Fantasy’s successor, Warhammer: Age of Sigmar, and the ever-popular sci-fi spin-off Warhammer 40,000.

Both games are well-designed and accessible – indeed, Warhammer Fantasy was killed off because it was too complicated and required too many models to draw in new players, hence its replacement, Sigmar, is probably the easier to pick up. Both games have a ton of colourful factions, world-leading figurines, and rich lore to get stuck into, though don’t expect much in the way of shiny sword and sorcery. In fact, the tagline for Warhammer 40,000 is ‘in the grim darkness of the far future, there is only war’, which is commonly supposed to have inspired the portmanteau ‘grimdark’, so you can guess at the tone. Age of Sigmar is no better: in lore, the bad guys won at the end of Warhammer Fantasy and literally blew up the planet.

These are probably the two most popular miniatures games in the world, so if none of your friends play, you’re basically guaranteed to find someone who does at any decent gaming guild, or you can just wander into your nearest Games Workshop – their staff are knowledgeable, passionate, and will happily show you the ropes.

Because you’re one or several of the following things: time-rich, cash-rich, stressed, or in need of something to actually do when you hang out with your friends that doesn’t involve – shudder – going outside.

Many Warhammer collectors don’t even play the game, they just get an immense feeling of satisfaction from admiring a shelf full of really cool models that they painted by hand – imagine such a tangible testament to what you can accomplish with a few hours’ care and concentration, ever-present in a corner of your living room. Warhammer offers a lot to many different types of people. It’s all good.

The latest edition of Warhammer: Age of Sigmar has three starter kits, depending on how big a commitment you’re ready to make. 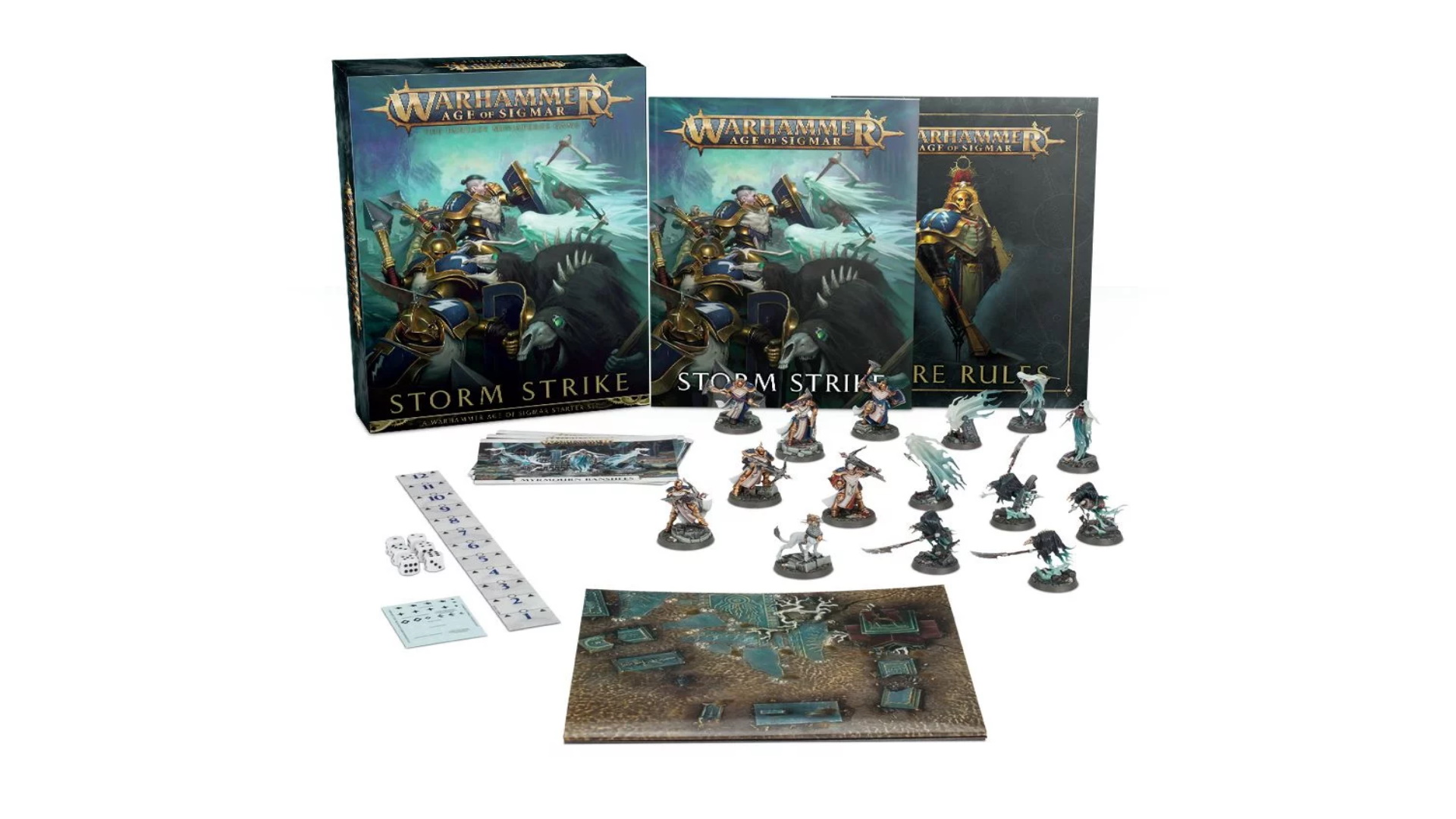 We suggest you start with Storm Strike, the smallest set. Ranging from $40 to $50 on Amazon, it’s the most affordable introduction to Age of Sigmar and has everything you need to start playing, including: 15 push-fit miniatures for the Stormcast Eternals and undead Nighthaunts factions; nine Warscroll cards with rules for each model; an accessible 16-page booklet of core rules; and a more comprehensive 80-page guide to other facets of the hobby, including painting.

If you’re ready to start with slightly larger battles, you can drop around $70 to $80 on Tempest of Souls, which includes all of the above plus a larger force of 12 Stormcasts and 20 Nighthaunts. And if you’ve decided to leap into the hobby at the deep end, you can get Soul Wars for a princely $160. The full-fat starter set, this includes 52 models plus a 32-page scenario booklet setting the scene for their battle, and the official 320-page rulebook for all situations (including bet-losing friends, home defence, light yurt construction, etc).

If you prefer science fiction, Warhammer 40,000 also has three starter sets at the same price points. First Strike is the baby, Know No Fear is the medium option, and Dark Imperium is the big one. The factions at play are the Ultramarines, the vaguely Romanesque vanilla flavour of Space Marine supersoldiers that 40k has made so famous; and the Death Guard, a type of baddie space marine corrupted by the demonic powers of Chaos.