Abandoned spaceships are inherently creepy: you’re in space, it’s claustrophobic, shadows are elongated, there are weird noises that you can’t explain because you’ve never been in space, but your house creaks a bit when you’re alone and – oh God… what was that?

Screw being in space, basically.

Alien: Isolation nailed that creepiness, the sense of loneliness you must feel to be floating in the infinite blackness, and much of that was down to the sound design; was the ship just creaking, or is the alien in the vent? You had this paranoia before you had even been confronted with the beast. Played with a headset on, I got genuine heart palpitations.

Well there’s a new first-person, Unreal 4-developed game set in space called Caffeine, and it has the potential to nail that same feeling, but with a twist.

While I haven’t played Caffeine, it looks atmospheric in the gorgeous screens. It also hasJonathan Wachoru working on the sound – if you don’t know who he is, he was the lead sound designer on Outlast. Yep, he’s the guy responsible for hearing that bulbous monster dragging its weapon across the floor as it searches for you in the flooded basement. You can barely see anything in that section – it’s all in the audio. 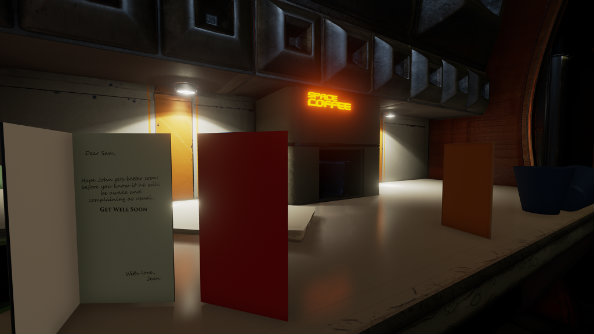 Dylan Brown, Caffeine’s lead designer, hasn’t worked on a game before, but he’s been plugging away at it for over a year. While that might not seem like a long time, the game is episodic and will be split across three episodes, the first of which is releasing some time in October.

“The premise of Caffeine is that the earth’s population has run out of caffeine sources on Earth so massive space ships are built by the largest corporations to mine enough material from space to quench the thirst of the human race,” said Browne in reply to my email.

“You wake up alone on one of these ships as a young child – from there you set out to explore the large non-linear structure to find out what has happened to the crew and what the current situation is. The game uses simple exploration mechanics, simple environmental puzzles and a touch of horror.”

From his description, it sounds like it could be going for something similar to Gone Home: you go into it expecting one thing and get hit with another.

It looks interesting, perhaps blending horror with comedy to create something original. We’ll see in October whether the three-man team, made up of Dylan Brown, Jonathan Wachoru andAdam Klingman (the composer), will be able to pull it off.

Check out some alpha footage below:

You can also download a demo on the official site. There’s even a version compatible with the Oculus Rift.