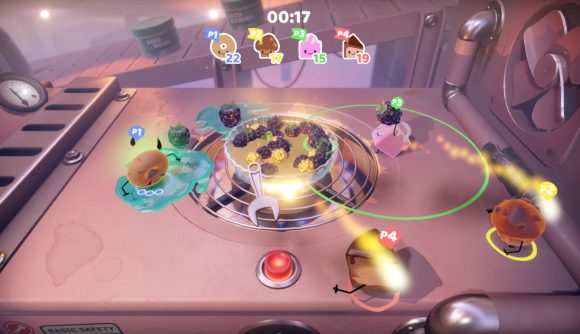 They say don’t play with your food – but what if your food has an unquenchable urge for violence? Cake Bash is like the Crash Bandicoot spinoff Crash Bash, but instead of Crash and Tiny the Tiger having a go, it’s a load of cute, delicious looking baked goods settling the score.

Showcased as part of the Steam Game Festival, Cake Bash is a 4-player mini-game brawler involving everyone selecting their favourite confectionery then duking it out for supremacy. There’s a cupcake, a french fancy, a muffin, a slice of chocolate cake, whatever your treat of choice, and the arenas range from the kitchen hob, to an outdoor table at a café, a counter-top, and beyond.

Big lollipops and other weapons are available, and some levels involve environmental dangers, like cooking soup spilling over, or the dreaded pigeon coming to munch on your crumby innards. It’s very much a hyper-colorful, slightly demented version of 2000’s PlayStation classic Crash Bash, the bandicoot’s Eurocom-developed party game that traded platforming for trying to shove opponents off raised stages of varying descriptions.

Made by High Tea Frog and published by Coatsink, the Cake Bash demo is available on Steam now, and you can play with your friends over Steam following the instructions in the video below. The full game is expected this year, and it’ll include local and online multiplayer, so you can torment strangers over the internet when your real friends have had enough.

We have a list of other notable demos from the Steam Game Festival, if you’d like to check out some other oddities.