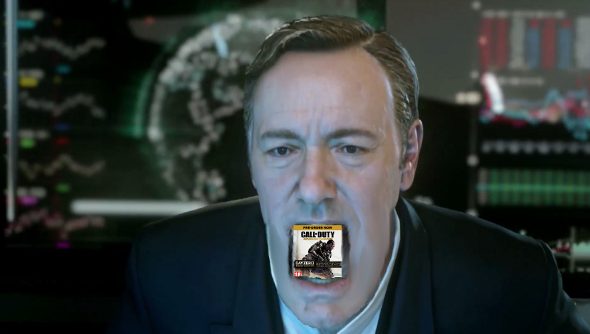 Not only does Call of Duty: Advanced Warfighter have three collectors editions for you to choose from, today Activision revealed that there’s a special pre-order edition: the Day Zero Edition. It nets you 24 hours of early access.

Last week Activision’s head of publishing noted that there was an industry-wide downturn in pre-orders, and the big publisher would need to explore new ways to measure a game’s potential success and tempt customers.

Obviously it’s not found one yet.

The Day Zero Edition comes with a bunch of DLC, including custom weapons, the Advanced Arsenal DLC and double XP for 24 hours in multiplayer.

Given that the draw of the franchise is its multiplayer, this sort of nonsense is more than a bit off-putting. Pre-ordering this version will not only give players a whole day to get a leg up on the prospective competition, but will give them even more tangible benefits with all that extra XP.

It manipulates anyone who finds themselves obsessed with being competitive – no doubt a large swathe of the shooter playerbase. It’s the perfect example of the negative place these incentives come from. It’s not really saying “hey, get this game a whole day early”, it’s saying “if you don’t pre-order this game, you’re going to be left behind”.

Last week I said that the decline of pre-orders is good for everyone, but it looks like we’ll still have to wait a while for these good things to happen.