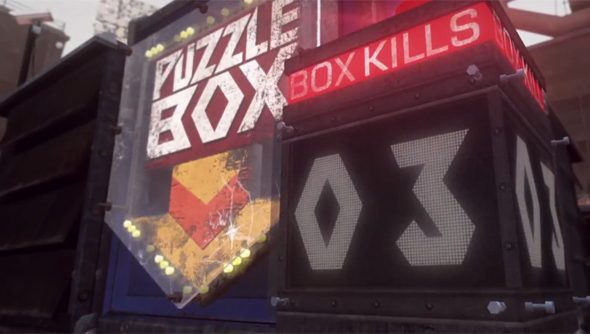 Nemesis is the best-known attraction at Staffordshire’s premier theme park, Alton Towers. A whirling dervish of a rollercoaster covered in garishly pink plastic tendrils, it could slot quite neatly into Call of Duty Extinction lore.

There’s a sense, in this iteration, that Call of Duty is fading in the sun like the pink paint on that great ride from the ’90s. But Infinity Ward would probably rather not think about that. Instead they’ll barrel through the release of this, the last map pack for Call of Duty: Ghosts.

The standout addition is Showtime: a “futuristic death arena” reworking of Modern Warfare’s Shipment, soundtracked by cheesily-voiced commentator announcements blasted into the play area over tannoy.

The other three multiplayer maps are “small-to-medium” is size and “designed specifically for Call of Duty’s distinctive fast-paced, gun-on-gun gameplay”. Dynasty dots field orders about a Chinese mountain village. Subzero sends players to a Canadian submarine base. And Goldrush is wilfully absurd: a US mine populated with rideable mine carts and player-directed packs of wolves.

The final chapter of Infinity Ward’s Extinction story sees players comes face-to-face with the Ancestors they’ve been following: overgrown XCOM sectoids with the same sort of psionic powers. We’ll be able to pick a path through alien-infested Atlanta and craft “over-the-top” weapons.

Nemesis will cost £11.59 / $14.99, and is included in the existing Ghosts DLC season pass. It’s out on August 5 for consoles, which means we can expect it a month later. Tempted to return for an old favourite?