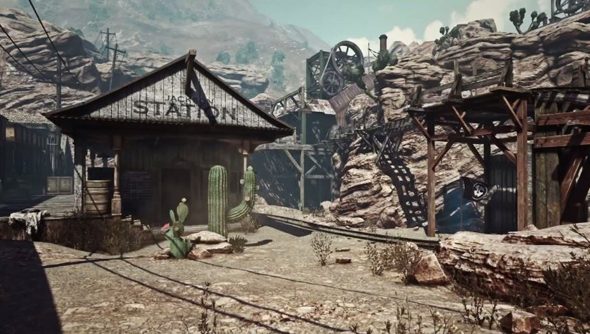 There’s been a trend in Call of Duty development over the last few years. Expect po-faced geopolitics from the single-player campaigns – it’s only in post-release DLC you’ll see its developers having any fun.

Activision have begun rolling out preview footage of Call of Duty: Ghosts’ last map pack, Nemesis, to YouTubers. And it looks commendably silly.

Goldrush is set in an overrun US mine, replete with player-directed packs of wolves and functioning mine carts.

A ride in one of the carts turns the map into one, long on-rails sequence, and makes pop-up moles of other players.

At first it’s difficult to see what’s preventing unscrupulous enemies from training their sights on a point further down the rails and firing at the first sign of movement. But it becomes clear that the tracks run all over the level, and cart movement is further complicated by a moving vertical platform.

A similar preview has emerged for Sub Zero, an abandoned Canadian submarine base. It’s commentated by an apparent associate of Jesse Pinkman, through the eyes of a player in one of those unlikely perma-sprint killstreaks CoD multiplayer is all about these days.

The mix of high tech and extreme cold lends the map a distinct Goldeneye feel. Three pathways run through the base’s interior and exterior, though you’ll want to stay indoors if possible. Players can call down snow beasts with a field order – shadowy monsters that hunt down enemies caught out in the blizzard.

Ghosts’ Nemesis DLC is out on Xbox tomorrow, which means we can expect it on PC in about a month. Are you at all intrigued by its reimagining of Call of Duty’s smallest map, Shipment?