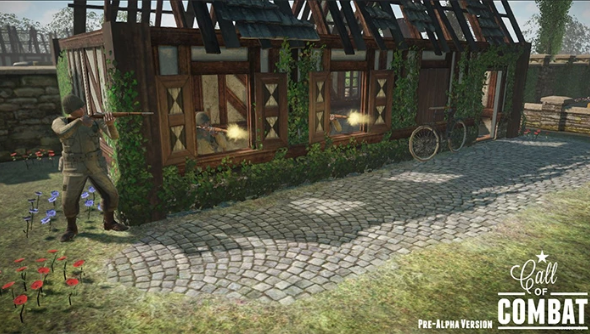 Earlier this week we asked you what game would you like to see revived for the modern day. If by any chance your chosen game was thirteen-year-old multiplayer RTS Call of Combat, then you’re in luck: developer KAVA is putting together a modern update of the game. Construction is almost finished, but just need a little extra cash to get the final armaments fitted to the hull. To Kickstarter!

The original Call of Combat, released in 2002, was a small cult hit, and stayed alive and active for almost a decade. Developer KAVA began to find continuing to support the game on more modern systems an uphill struggle though, and decided that a new and modern version of the game had to be made.

It’s an interesting little game; on the surface it’s a little Company of Heroes, but actually it’s closer to Relic’s other RTS: Dawn of War II. Players each control a unit of four soldiers, and team up with other players to create large platoons of men to fight the enemy with. Keeping your squad as part of the larger plan seems to be the key.

The Kickstarter, ongoing until 20th March, is looking for €30,000. The final game would be a refined version of the classic Call of Combat game, with a military ranked leveling system, an in-game chain of command to encourage teamplay, weapon and loot trading, and a battle planning map.

If you’re unsure if Call of Combat is for you, the Kickstarter has a playable demo for Windows and Mac that you can try right now.