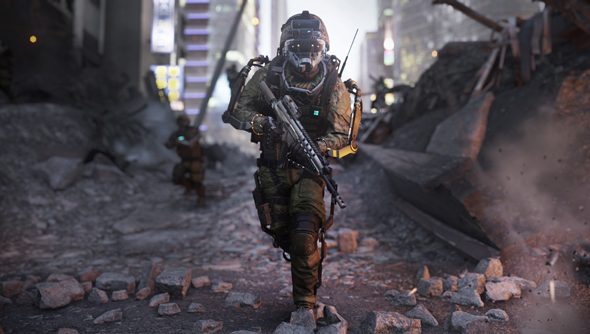 Activision are living in a marketing spin-off to Minority Report right now. They’re asking the big questions: does purchase intent always end in purchasing action? Can a capable developer improve the lot of Call of Duty, or are the declining returns of every successive game in the series predetermined?

Every analyst in America seems to think Call of Duty: Advanced Warfare will fare worse than Ghosts – but Activision Publishing CEO Eric Hirshberg is hopeful that Sledgehammer’s debut will outsell its predecessor.

Be warned: some creepily cold discussion of sales metrics follows.

“We see purchase intent well above last year,” Hirshberg told GamesIndustry, “and we see engagement with the brand in social media channels all being markedly up, so I’m still optimistic.”

The analysts who have predicted a fall in CoD sales this year are basing their numbers on pre-orders, noted Hirshberg. Given players’ increasing predilection for downloading new games – especially on Steam – that’s an unreliable measure.

“Preorders are a good barometer for day one, but I don’t think they reflect the overall demand for the product,” said the CEO. “[They] don’t represent what they used to – because of the move to digital and all the ways people can buy the game.”

Last year, we noticed that Call of Duty: Ghosts multiplayer was doing about half the numbers of Black Ops II on Steam. It’s a little too early to tell if Sledgehammer’s game has continued that trajectory – but we do know that a tediousAdvanced Warfare single player campaign isn’t going to help.

Have you bought the new CoD yet?