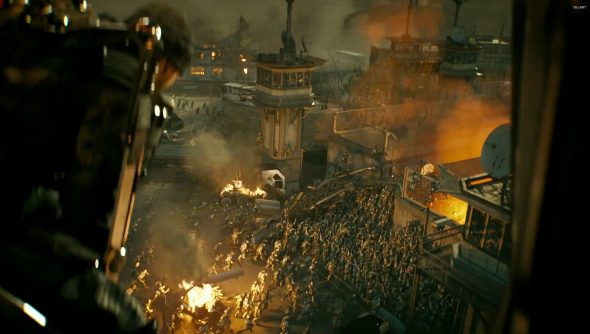 Zombies have, inexplicably, become a mainstay in Call of Duty, starting with World at War and its Nazi zombies. The shambling undead were skipped over in Ghosts, where aliens took their place. Really, it seemed like a missed opportunity not to force players to deal with cheeky poltergeists.

We already knew that Advanced Warfare would be going back to the walking cadavers, but that it would be kept out of the core game and only available in DLC or to season pass holders. Boooo, etc. That zombies were making a comeback was teased in a nauseating trailer the end of the Exo Survival mode, which you can watch below. They’ll be made available in the Havoc DLC early next year.

“As things were wrapping up around launch, we started playing around with the idea of what happens when zombies were thrown into the mix with exoskeleton gameplay,” the devs explain on the Sledgehammer blog. “What we came up with is Exo Zombies — an entirely new breed of zombies and an entirely new co-op experience that is truly unique to Advanced Warfare.”

So they’re not regular zombies, and they’re not Nazi zombies – they are exo zombies. It’s exceptionally silly, but – despite how bewilderingly po-faced the Call of Duty campaigns are – it’s hardly a serious franchise.

It’s a pity that such a popular, enduring mode has been hacked off the main game and turned into DLC, but it’s an even greater pity that this is completely expected and not in the least bit out of character. Will any of you lot be throwing more money at Activision for this?