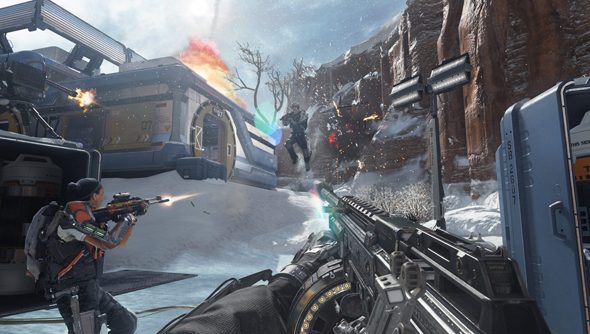 Sledgehammer have a Call of Duty: Advanced Warfare update “in the works” that pulls together all the community-requested tweaks and fixes to emerge since the game was released a week ago.

They’ll do nothing to make the Advanced Warfare campaign less dreary, but the imminent patch will tackle issues with the game’s prestige mode.

In traditional series fashion, prestige players in Advanced Warfare trade in their top-level rank and unlocks to start all over again for a handful of bonuses.

But players have encountered problems with their emblems and challenges, as well as the way stats accumulate towards leaderboards. If you’re grind-minded enough to have levelled to the top of Advanced Warfare’s multiplayer already, you’ll soon find those issues fixed.

Perhaps most pertinently, they’ve sorted a problem in round-based game modes that was affected win/loss ratios – the be all and end all of CoD multiplayer.

“We’ve had our ears to the ground, listening to your feedback,” wrote Sledgehammer on their community site. “Our commitment to continuing to support the game and community is as strong as ever, and we have the whole team focused on making the experience the best it can be.”

What they haven’t sorted yet is the dedicated server support promised before release. So far, Activision have offered only this vague statement:

“Advanced Warfare employs game servers hosted at data centers globally on all platforms and listen servers as part of our proprietary matchmaking system. Our goal is to ensure the best possible connection and greatest gameplay experience regardless of location and time of day.”

Hrrm. Have you been playing Advanced Warfare online, or are you all Spaceyed out? Perhaps a return to World War II would help Call of Duty?