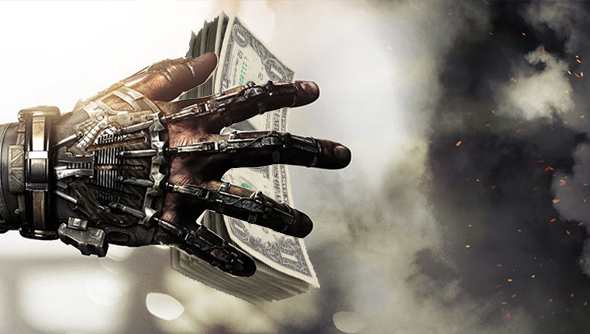 Call of Duty: Advanced Warfare’s not had the best starting week in the series’ history. It’s week one sales in the UK put it fifth amongst its forebears. However, that’s not stopped it outselling Call of Duty: Ghost’s week one sales, and the combined sales of Wolfenstein, Titanfall, and Destiny.

Not bad for a game our Tim called “boring”.

The numbers from from Chart Track a UK sales tracking company. Right away I should point out that Chart Track numbers only account for physical copies of a game, so their data’s predominantly console sales.

That said, Chart Track say that Call of Duty: Advanced Warfare “convincingly beats the week 1 number of 2013’s ‘Call of Duty: Ghosts’ despite being the 5th biggest launch in the Call of Duty series as a whole.” And it’s currently the number selling game in the UK.

Chart Track also compared Advanced Warfare’s launch numbers to those of the biggest three shooters released this year – Wolfenstein, Titanfall, and Destiny. Advanced Warfare beats all three of them combined by 14%. Clearly Activision have managed to convince people to take out their wallets again, despite the disappointment of Call of Duty: Ghosts.

However, if we look on PC, Steam’s charts tell a different story. Advanced Warfare since 13th on the top games by player count list with a peak of 35,000 players playing concurrently. That’s below the new Football Manager game and even The Binding of Isaac: RebirthThat’s 1,000 less than Ghosts’ peak and Black Ops 2’s peak was more than 70,000 players.

We’ve said in the past that each Call of Duty release is killing off the multiplayer scene on PC and Advanced Warfare looks to continue that trend.