A part of me was all Call of Dutied out, I admit. A very big part of me. From my thighs downwards, for example, had simply had enough of Call of Duty. All of my right arm had given up after Modern Warfare 2. Entire portions of my face struggled to register any enthusiasm for Black Ops. Largely speaking I had ceased being able to care about Call of Duty, the most popular shootyman videogame in the world.

But hey, this one. This one has Kevin Spacey hovering in the corner of your screen telling you to rescue Nigerian prime ministers. This one has double jumps and exo-suits, and a development studio that’s been given time (three years) and space (erm, I don’t know, something the size of a football pitch I suppose) to make something good.

Call of Duty: Advanced Warfare’s single player campaign continues the series’ fine tradition of blowing up ever larger structures in an effort to startle an audience of increasingly unfazed teenagers. This year they’re blowing up the Golden Gate Bridge. Next year California will break off from North America like a soggy digestive and fall into the sea. The year after that the Earth will crack open like a big egg. 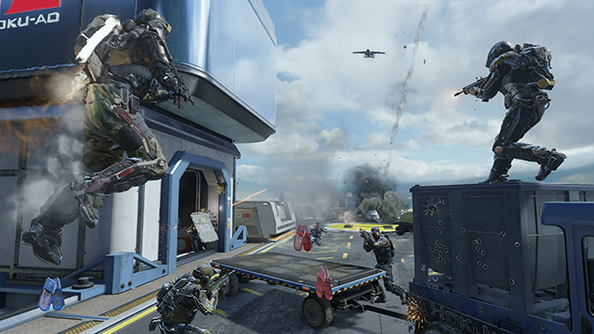 It’s brilliant, actually, and terrifically exciting just to witness. There’s much to be said for Sledgehammer’s ability to animate a world falling into pieces, and to take you from a detailed office interior to a burning landscape glittering with shrapnel in the space of just four footsteps. Call of Duty is explosion theatre of unpredictable scales.

With Advanced Warfare Sledgehammer are focusing more on player immersion, insofar as they’ve stripped down HUD elements and placed that information elsewhere on the screen. Ammo readouts are on your gun, maps are projected holographically on to floors, Kevin Spacey appears in a Google Glass window in the corner of your screen. There are nowseven kinds of bullet sound, so even your ears can enjoy the immersion.

Player movement is a big deal here too, with the exo-suit being central to getting around the levels. You can double jump using a small jetpack, which means the environment features more detailed rooftops with vents and discarded boxes and things, something game designers call “verticality”. The suit lets you climb walls too, which is such a jolt to Call of Duty’s design tradition that it’s forced Sledgehammer to throw away the usual terrorist ghost train approach and instead reconsider how Call of Duty works. 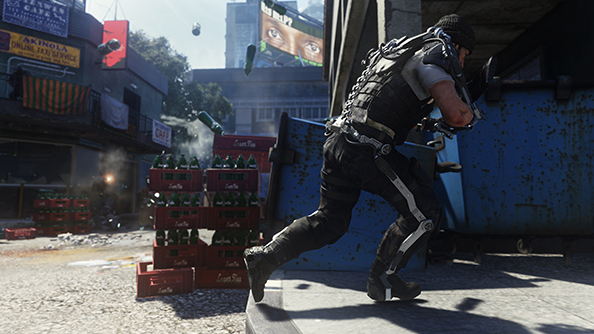 We were shown a level, Traffic, in which our exo-suited hero used his magic magnetic gloves to scale the wall of a government office, before using a “mute charge” to deaden all sounds in the area, allowing him and his buddies to blow a hole in the roof and enter the building unheard. Another gadget, when placed on a wall, allows the player to see through it, á la x-ray vision, before he tags the aggressors in the other room. Taking aim, it’s possible to shoot the bad men through the thin wall and leave the hostages unscathed.

After that there’s a gunfight. Some funky grenades are chucked about, some of them flying around the level like mad bees and exploding in terrorist’s faces, others highlighting enemies behind cars and roadblocks. An advanced riot shield deflects bullets using raw science. And then there’s an impossibly exciting carchase in which many hundreds of men and women surely perished. Advanced Warfare is a totally ridiculous, dumb rollercoaster and I want to ride it some more.

I was invited to humiliate myself by trying out the game’s multiplayer, where the exo-suit really comes to the fore. A staggering degree of customisation lets you kit yourself out with everything from new exo-suit abilities (cloaking, grenade launchers, advanced dodging, magic shields) to nicer trainers, while the standard choice of custom weapon loadouts can now be tested in a neat Tron-style firing range that’s immediately accessible between games. 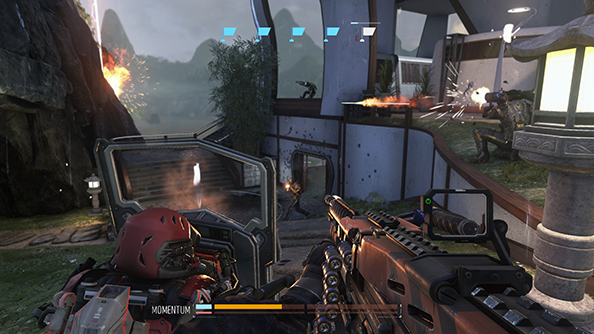 There’s a loot system with crates that pop open and give you prizes in a way that your ape brain finds incredibly pleasing. After one game I was gifted a high-end scorestreak reward that would activate six minutes into my next match, a hovering drone that could rain down gunfire on opponents. Scorestreaks themselves can be customised, and the lauded Pick 10 system returns in the guise of Pick 13. See if you can guess what they’ve changed there.

A new mode, Uplink, is basically future-basketball with jetpacks for jerks, where teams attempt to retrieve a ball (of data) and either throw it or themselves into a big glowing net (of internet). You can’t fire while holding the ball and, cleverly, it’s also possible to throw the ball to enemy players, forcing them to become momentarily weaponless and vulnerable. It’s testament to how much time Sledgehammer have had to develop Advanced Warfare that they’ve concocted the most original multiplayer mode to come out of Call of Duty since “who can stay alive longest”.

Besides that, and the new Exo-Survival mode, a four-way co-op mode that Sledgehammer say expands on their existing exo-suit mechanics, it’s the single player showstopper that’s regenerated my interest in the series. A studio given the most free rein in the series’ dappled history to do something to make people care about Call of Duty again is a rather exciting prospect, one that shows a keen awareness on Activision’s part of the consumer tiredness that’s started to creep in around their healthy core of hardcore fans.

I think Call of Duty: Advanced Warfare could be really, actually very good.