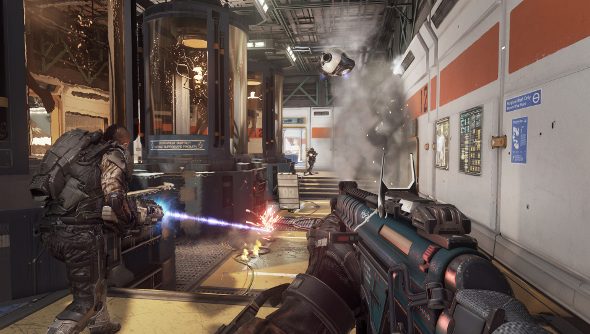 I’ve been reading a few reviews of the latest Call of Duty whilst trundling through the new game, and I’m absolutely baffled. Generally, the reception is ‘quite positive’. A few sites have said it’s the best campaign in years.

That’s so not true. I think it’s probably the worst CoD has ever been.

The story isn’t terrible. Kevin Spacey is a military contractor selling tech and the threat of force to the planet, following a series of terrorist atrocities. He is, no question, the best thing in the game, a performance worthy of the name. The second best thing are your various codenamed buddies. There’s a black guy, a beard-guy, a lady, and a sacrificial lamb and you can tell someone who knows what they’re doing has given them a decent script and time to read and act it properly.

That’s the sum total of the things I like about nuCod.

The problem I have is the de-gaming of the entire campaign. CoD as a series hasn’t really ever given players options, or really let them play. It is a chain of bombastic corridors in which you click on men’s faces until they fall over.

From the previews, and reviews, you’d be forgiven for thinking this CoD was different. You are a super-soldier. You have an exosuit. You can leap tall buildings! You can rip car doors off and throw them at men! You can grapple and climb and lunge and turn invisible and use EMPs to take down angry robots.

But, as ever, it’s just a big lie. The vast majority of the interactions made possible by CoD’s new setting are only available in very specific places, where the game deems it necessary and important.

Want to play with your special drone toy? Well you can’t, until gruff bearded man who takes point says it’s okay to do so. Want to use your special muffle bomb to silence a room before you blow the bloody door off? Only with permission. Want to turn invisible? Fill out a form in triplicate, file it with a superior, and the game will get back to you. 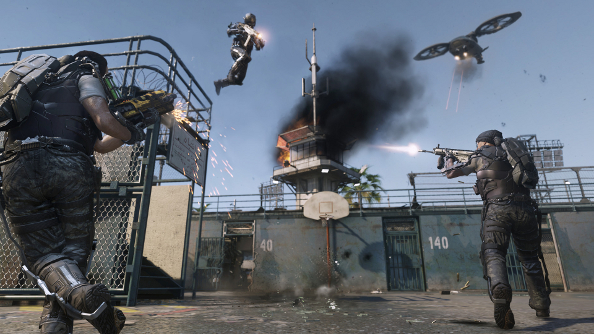 The game even strips away mechanics to make the game worse. You spend a lot of time shooting at heads in these games. So in Advance Warfare, most guns come with a special scope that acts as a wall-hack, outlining enemies in bright red. You don’t even have to squint at far away targets now – they’re painted out of the scenery for you to kill. Grenades and grenade launchers – items that requires some level of player skill to aim and kill with, now seek out their prey. They are fire and forget: they’ll just hover in the air a bit until they find someone to explode at.

Here’s the real problem: nothing that Call of Duty does hasn’t already been done, or surpassed elsewhere. The abilities that are threaded through the campaign are exactly the ideas Crysis has been trading on for a decade. In that game, you don’t need to get permission from your superior in those games to use a demolitions pack.

Advanced Warfare ignores everything that’s going on within the AAA industry.

I think I understand why Call of Duty is making that mistake.

In the last few months, I went back and played Half-Life 2, Episode 1, and Episode 2. What struck me about those games is just how refined their mechanics are, and how long they’re allowed to develop.

The buggy journey along Highway 17 lasts for a good hour or so. The air-boat trip, the same. Call of Duty attempts similar ideas, but compresses them into minute long bursts. It’s okay that the handling of your jet-bike is so shallow because in thirty seconds, you’ll be doing something else. Don’t fret that even after 10 games enemies in Call of Duty don’t understand how to react to a player with a sniper-rifle: in just a moment he’ll be driving a tank.

I think it’s this compression that’s causing the problem. Their levels are so ridiculous that they simply have no space to develop, improve and elevate their mechanics.

It’s repeatedly said that Call of Duty only sells for the multiplayer. I think that’s idiotic. If you’re going to pay to put Kevin Spacey in a videogame, you should make sure the bit he appears in is up to scratch. Advance Warfare, sadly, isn’t.