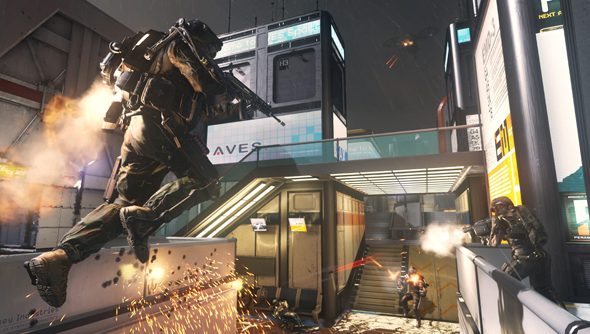 Every year, the CoD community is spread thinner by a new game. That seemed to spell disaster for Call of Duty: Ghosts multiplayer, which couldn’t pull Steam players away from Black Ops II.

But there is another, more positive way of looking at Activision’s horcrux problem. Every year, the CoD community gets a chance to start again and redefine standards of online conduct. Sledgehammer hope that the nebulous playerbase now forming around Call of Duty: Advanced Warfare will refrain from “toxic behaviours” – ranging from “inappropriate” emblems to misogynistic abuse.

Sledgehammer’s Michael Condrey told BBC Newsbeat that the CoD community as a whole is “very healthy, engaged and thoughtful, probably like anything anywhere well outside of gaming”.

“In the fringes of a lot of areas of society there are examples of people behaving poorly,” he said. “I certainly wouldn’t characterise the community of fans I know and had the pleasure to engage with as toxic or misogynistic.”

Nevertheless, Condrey issued a warning of sorts to players planning on throwing themselves into “toxic behaviours” and “abusive language”, or wearing “inappropriate emblems”.

“I don’t want that around,” he said. “Come to the game to have fun, come to be social, come to enjoy and build a community and have a positive energy.

Call of Duty: Advanced Warfare unlocked on Steam yesterday. How’ve you found CoD community there in the past?