Blackout perks can save your life in a pinch, so knowing which of the 14 perks to grab as you’re looting is an essential part of mastering Call of Duty’s battle royale. Most Blackout perks are inspired from popular perks from Black Ops 4 Multiplayer, but Treyarch has also added a few perks specifically designed for battle royale, offering a mix of general and situational buffs.

Perks in Blackout occupy an inventory slot until they expire, which can take a few minutes, so don’t just activate perks for the sake of it or you’ll find yourself unable to carry more valuable items. To help you decide which Blackout perks are worth your time and which ones you can ignore entirely. We’ll also explain some of the more subtle buffs provided by each perk and offer advice as to when you should use them on the battlefield.

We have ranked every Blackout consumable below, starting with the very best perks at the top and ending with a couple that you should steer clear of. Here are the best Blackout perks:

It might not seem like the best Blackout perk, but Awareness makes a huge difference when it comes to detecting enemies. Not only will you be able to hear enemy movement from further away, you will also be able to hear enemies who are crouch-walking. Winning fights in Blackout is all about getting the jump on your opponent, so being able to pinpoint where targets are without revealing your own whereabouts is hugely beneficial. 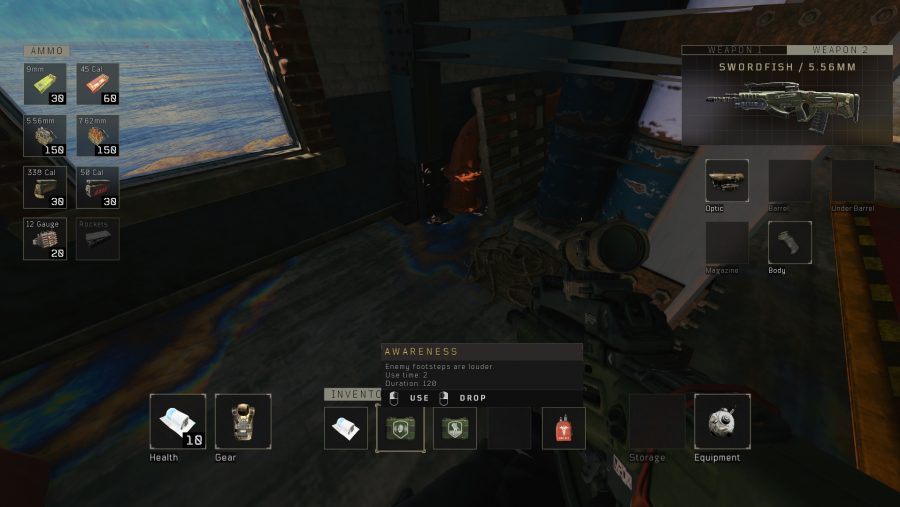 Dead Silence won’t help you find other players, but it is the most effective way of masking your position. It’s not quite as useful as Awareness, but Dead Silence does last for twice as long.

Whether you’re a skilled player or a battle royale novice, Skulker is always a great perk to have in your inventory. Players are easy to spot when sprinting around, which makes dashing into a play zone a risky move. With Skulker you can crouch-walk at the same speed as a player who is running, which makes reaching a new circle much, much easier. You also make a lot less noise when crouching, so if you’re a fan of stealthy movement then this perk is for you.

Breath hold time in Blackout is very short, which makes long-range sniping quite difficult, especially if you’re engaged in a shootout with multiple enemies. The same goes for swimming underwater: Iron Lungs will help you avoid detection for longer, allowing you to sneak into the play zone from a new angle.

The best players will have already fired their shot by the time you can register the audio ping from Paranoia, making it a little inconsistent. However, this perk will still help you avoid being instantly downed by a sniper and even give you a rough idea of where the threat was coming from. Activate at any time. 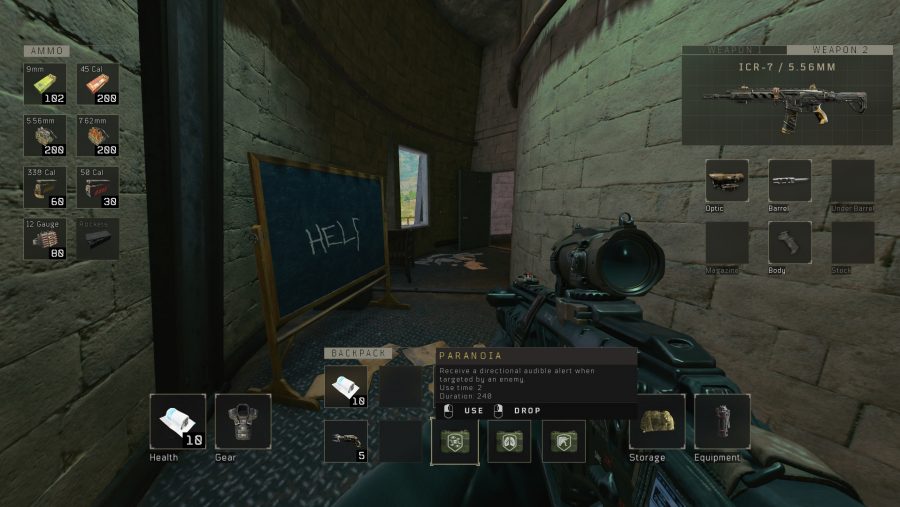 Fall damage isn’t a huge problem in Blackout thanks to the wingsuit, but the general buffs this Blackout perk applies to you are very strong. By far the most valuable is being able to use equipment while sprinting, which can help you heal as you sprint between cover, rush into the safe zone, or push enemies.

It’s all too easy to be caught out by the first circle collapse in Blackout, so the Outlander perk can be a lifesaver if you’ve got to trek all the way from Lighthouse to Firing Range. Keeping up with the circle is a lot easier in later rounds, so use this early on or don’t bother taking it at all.

It’s the impressive duration of this perk that makes it so useful. Activate it as you near the end of the game and you’ll be able to rapidly gobble down any heals or perks left in your inventory as you see fit. 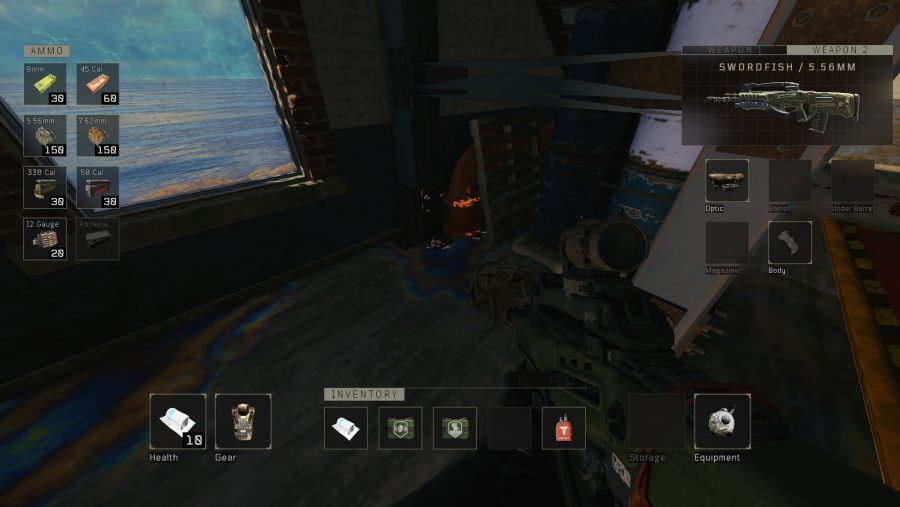 Just like the Consumer perk, Medic is great for making it through lengthy fights. Medic is a lot more useful in squads where reviving a teammate quickly can be the difference between your squad winning the fight or getting wiped.

This perk will help you survive late-game tactics like bombarding your enemy with grenades, but you’ll still be in a pretty sorry state.

Need a vehicle or looking for one to blow to smithereens with your Hellion Salvo? Engineer is great if you’ve been caught out by the circle collapse and need to find a vehicle as fast as possible. 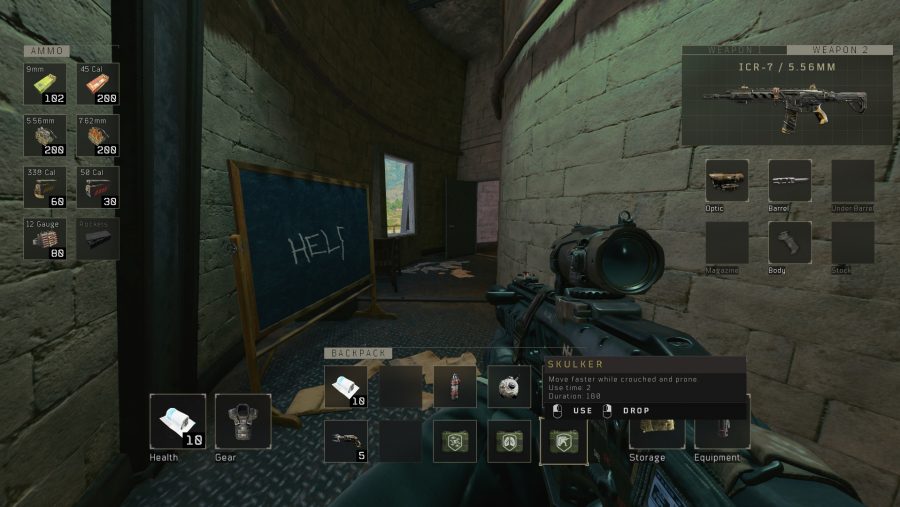 Great for efficient looting during the early game, but not worth an inventory slot beyond that.

This can be helpful in very confined firefights, but those are exceptionally rare in Blackout.

While Brawler is handy if you want to complete the Fist Fighter Dark Ops challenge, if you’re using melee in Blackout then you’re doing it wrong. There is a very specific situation where the Brawler Blackout perk might prove useful, but finding yourself in that position with this perk equipped is highly unlikely.

If you’re after some more Blackout tips then we’ve got a bespoke guide for you. Or, if you’re struggling with the tools of the trade, we also have a full Blackout weapons list for you to check out. Between all of this you should have everything you could possibly need to know about Call of Duty’s battle royale mode – all that’s left for you to do is drop in and get that win.