It’s Q4, which means it’s that time of year again: Call of Duty is here. This year it’s Treyarch’s turn to provide the thrills, and it seems like it’s done a great job with Black Ops 4; the multiplayer, battle royale, and zombies package is being reviewed well across the board. But great reviews don’t always equate to great performance, especially when it comes to PC ports.

But Activision and Treyarch want Call of Duty to be a big success on PC this year – which is no surprise, considering our platform is the hometown of the battle royale. Good performance starts with a robust software foundation, which is a job that was tasked to Activision’s subsidiary studio Beenox. Has it succeeded? That’s what we’re here to find out.

Our performance analysis is written to offer you the broadest picture possible, focusing on hardware similar to what the majority of players have installed in their machines, based on the findings of the Steam Hardware Survey. We test the game on all graphical settings using an i5 powered rig with 8GB of RAM, and try to hit 60fps with four popular graphics cards. Even if your PC is not identical to our test setups, you should still be able to estimate the performance levels you can expect from your own machine with our results. 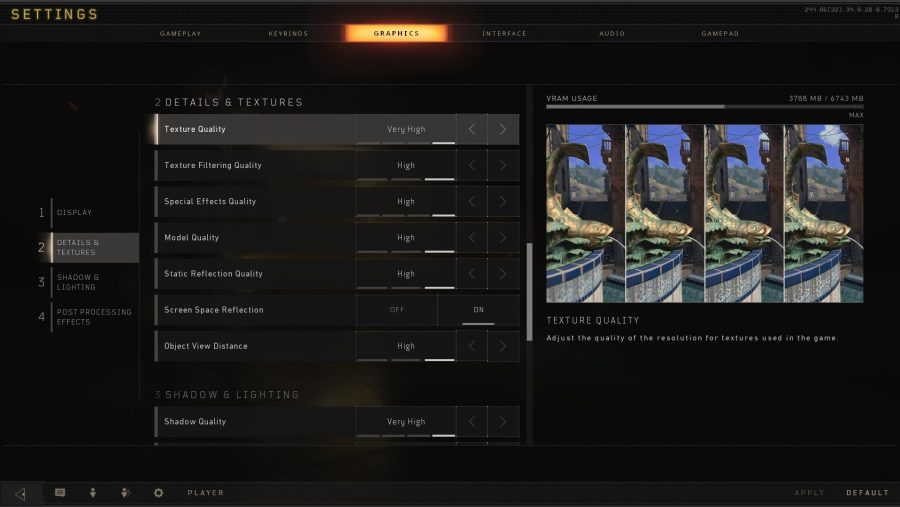 For this performance analysis we're using our reliable test bench: a PC designed and built to match the kind of machines that most people play on at home. Forget that Titan X and 4K display, this is a rig that’s actually affordable.

Black Ops 4’s graphics options are split over four categories: display, details & textures, shadow & lighting, and post processing effects. While this breakdown and the tooltips each option provides are useful, less so is the fact that there are no presets to choose from. While Black Ops 4 is capable of automatically adjusting itself to your system, there’s no top-level way of dialling settings up or down – everything must be done granularly.

No presets isn’t ideal, but the options are far from disaster. With seven options for detail and textures, five for shadow and lighting, and five for post processing effects, there’s a solid wealth of areas to tweak to perfection. The majority include at least low, medium, and high settings, with others including very high and very low settings, too. While it can be fiddly, the level of granularity on offer here is welcome. 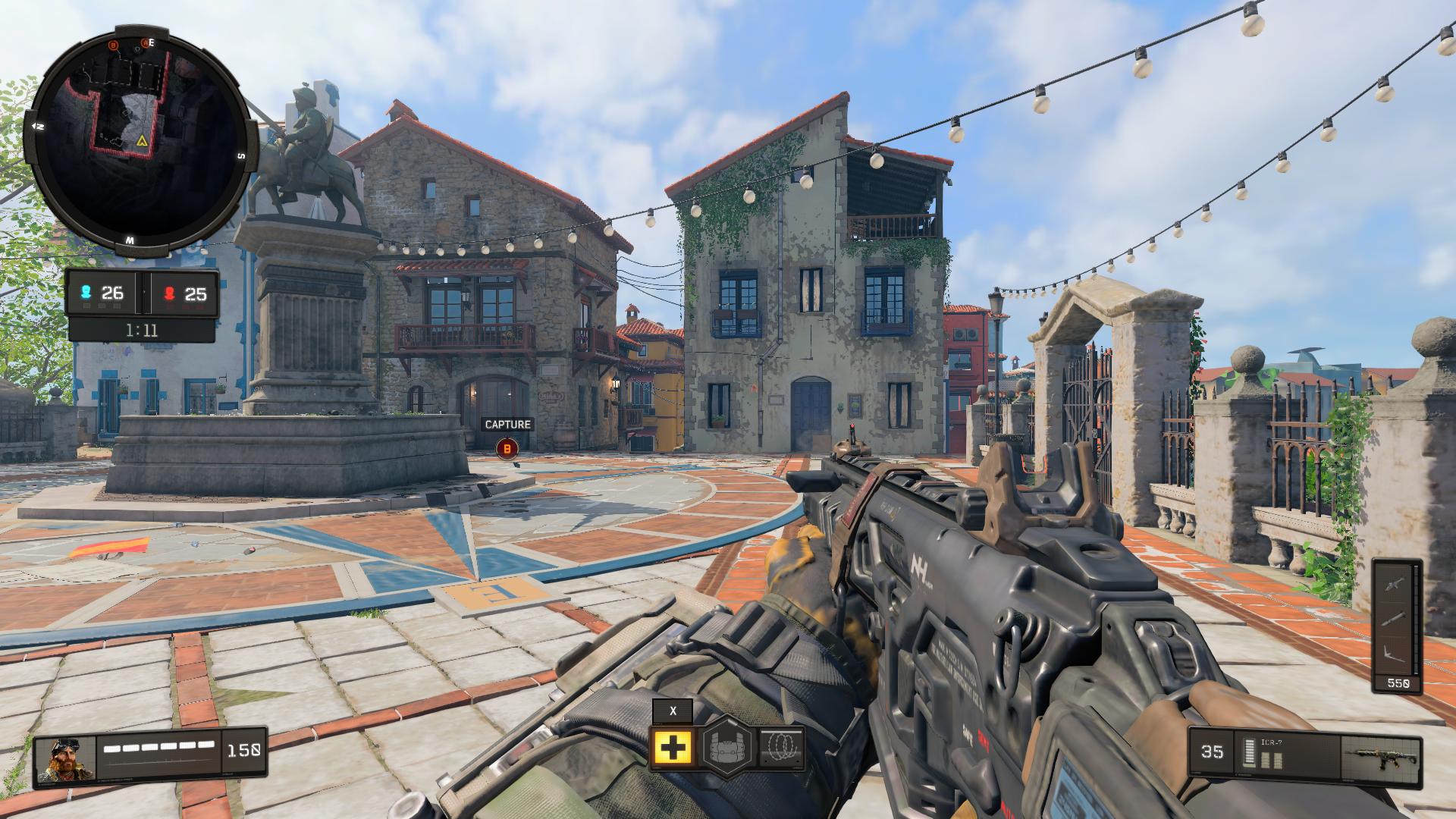 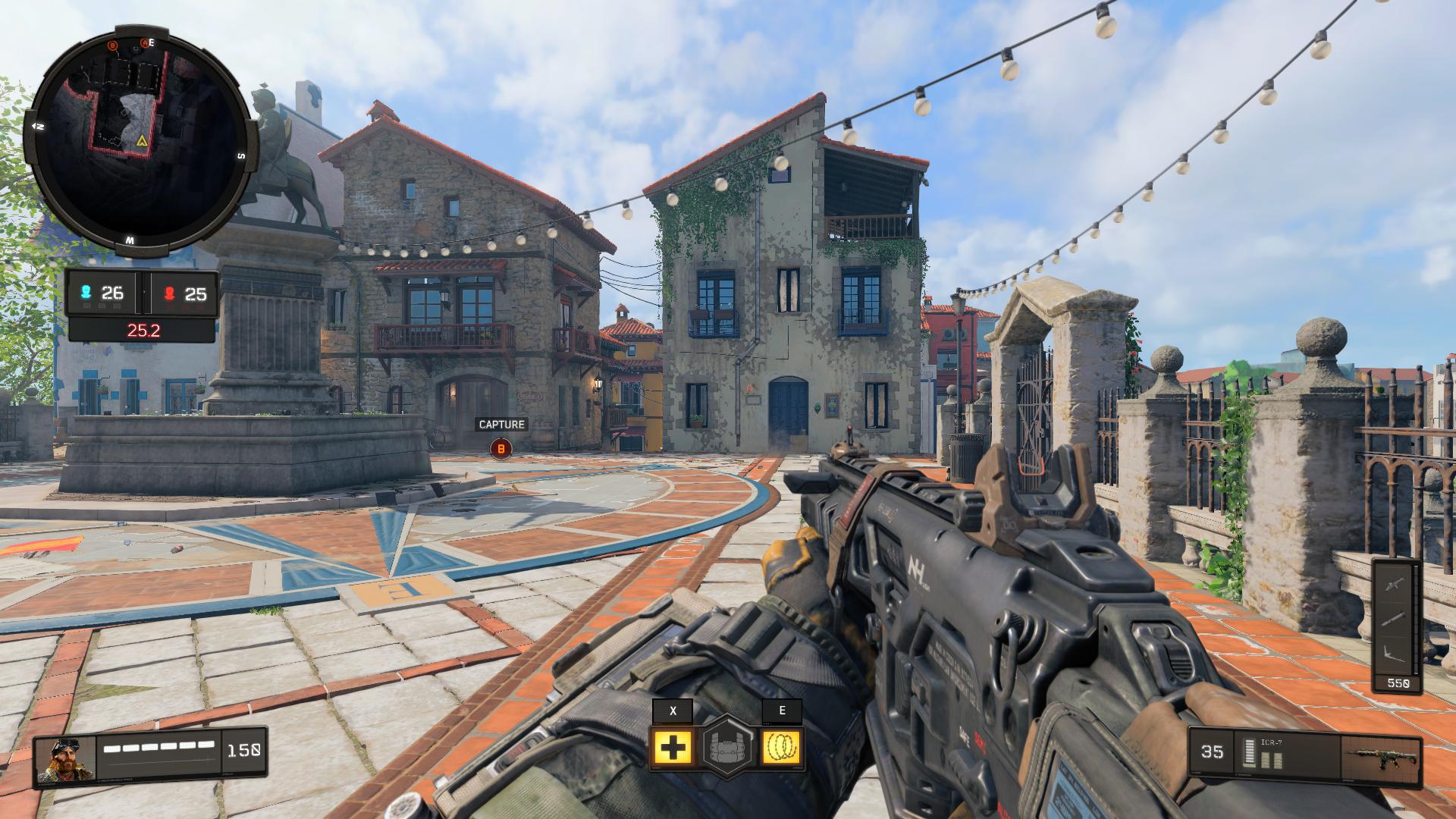 For our graphics analysis we compare four similar screenshots. Traditionally, we’d take these screenshots from the presets on offer, but as Black Ops 4 doesn’t offer any, we’ve created our own. You can find the details of each custom preset in our analysis. 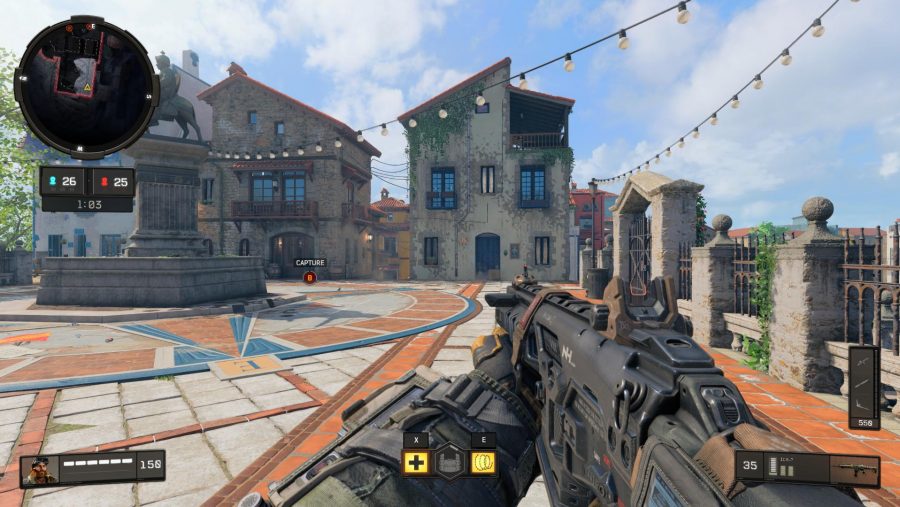 For our ‘ultra’ test we’ve cranked every option as high as they’ll go, so just hammer the right-hand arrows in the menus until they won’t cycle any further. The result is, as you’d expect from a Call of Duty game, a handsome image that’s not quite cutting edge.

There’s lavish detail on the weapon model, with high-res textures, an intricate mesh, and shadowing all along the various bumps and recesses. The environment is less impressive, but still relatively polished: the flagstones on the floor, for instance, are nicely tessellated to provide an uneven finish, with each slab casting its own ambient occlusion shadow. The draw distance is good, with the yellow building in the distance still clearly visible, but the surfaces of the houses are a little lower res than we’d like.

Importantly, a GTX 1060 can push out these visuals at an average of 91fps. That’s impressive performance with all the bells and whistles turned on, and it’s doubly important that the frame rate stays high in a shooter as lightning paced as Black Ops 4. Basically, with a mid-range rig, you can have BLOPS looking its best without worrying about competitive advantage. 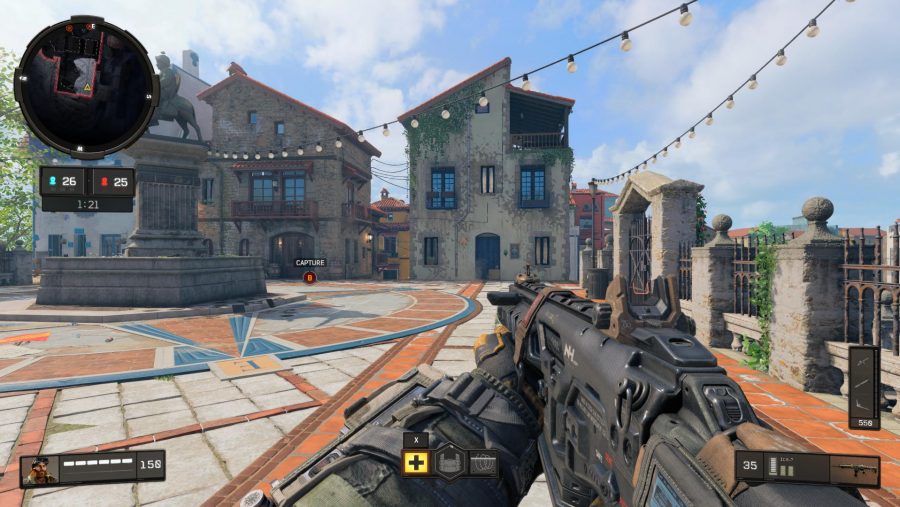 Grab your magnifying glass, because you’ll need one to spot the differences between very high and high. This is to be expected, since to create this profile you’ll be using an almost identical set up to very high, as only four options have a very high setting. Lowering those four options impacts only the smallest details: you’ll notice the two depressed circles below the rifle’s sling clip are less defined, as is the stitching along the left-hand sleeve. The general quality of shadows along the rifle is also reduced compared to very high settings. Aside from this, though, there’s little discrepancy between this and the higher-tier setup.

Making those small changes results in an extra six frames on average, bringing the mean to 97fps. 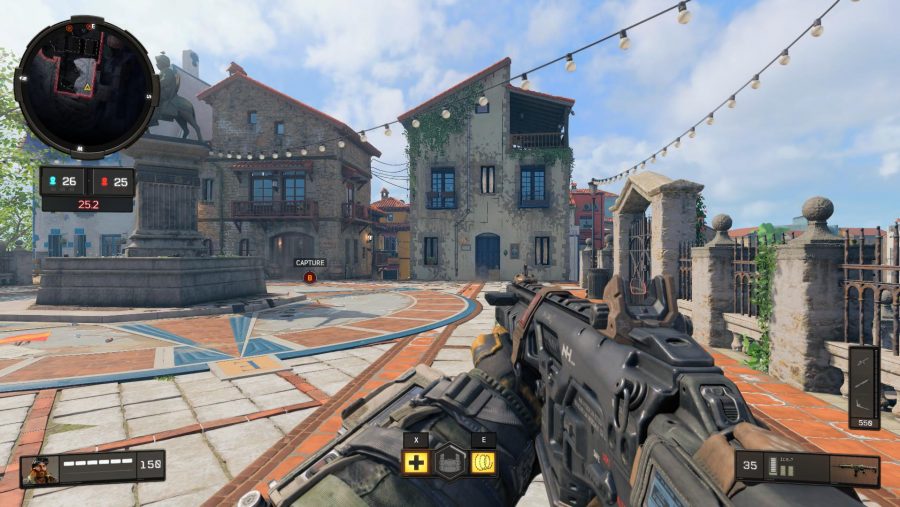 There’s an image-wide reduction in quality on our medium setup, which reduces all options to medium tier, disables screen space reflections and subsurface scattering, sets dynamic shadows to ‘self only’, global illumination to low, and motion blur to automatic. While the scene still looks good overall, there’s a clear reduction in sharpness thanks to lower resolution textures. Definition is lost in some areas, most notably on the rifle’s selector switch, which now looks lumpy and misshapen.

In return for such sacrifices, though, you’ll hit an average frame rate of 110fps. That’s a reasonable increase over high settings, and while unnecessary with a PC of similar specs to ours, could be a handy setup for those with lower-end hardware. 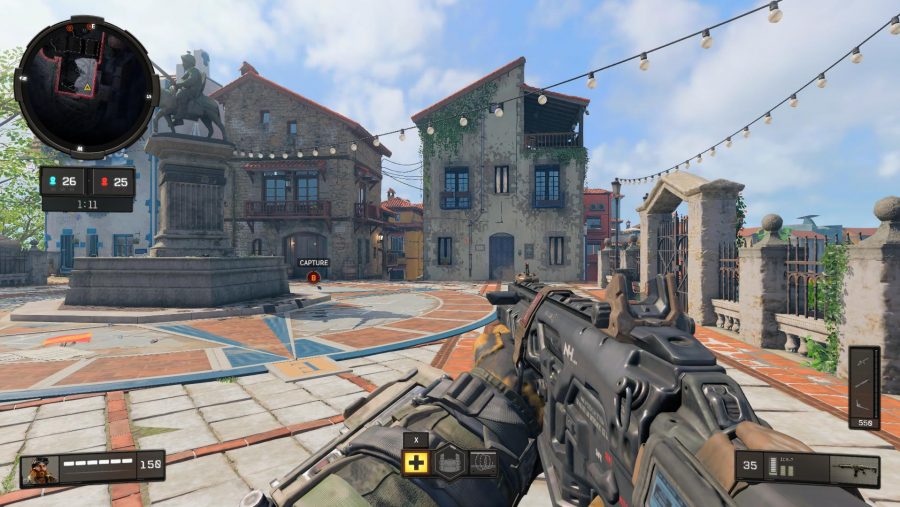 Our low setup reduces all available options to their low settings, and turns off screen space reflections, special effect shadows, weapon shadows, subsurface scattering, and motion blur. This isn’t Black Ops 4’s lowest possible setting – a few options can be dialled down further – but it’s one designed for high performance with acceptable visuals.

By reducing all these settings, many textures become blotchy and mottled, especially on the gun and hand models. The world doesn’t suffer quite as badly, but all detail is lost with the lower texture resolution. Sharp edges, especially on the rifle, are deformed and lumpy, and the lower quality shadows means most surfaces look oddly flat.

In exchange for these concessions, Black Ops 4 averages at 117fps. That’s a soaring frame rate, but it’s only seven frames higher than the much better looking medium setup. Unless you’re really struggling – something that the rest of our performance analysis suggests you shouldn’t be – you’ll want to opt for a far higher set up than this.

To see how Call of Duty: Black Ops 4 performs on various hardware setups, we test the game on four graphics cards – two from Nvidia, and two from AMD. We’ve sampled popular cards from the current and previous generation of GPUs based on the findings of the Steam Hardware Survey in order to offer the most useful information.

All four cards are tested at the highest settings, with every texture option set as high as they’ll go, and every graphical effect turned on. For this test we have used the PvP multiplayer component of the game, combined with FRAPS’s benchmarking tool to collect data.

Black Ops 4 runs fantastically at its highest settings even on graphics cards that are a few years old. Our worst performer, the AMD R9 380, hit an average of 59fps, meaning that with just a few small tweaks it can easily hit 60fps and provide great visuals. Nvidia’s last generation card fares better, with an average of 75fps, demonstrating that Black Ops 4 is well optimised for older hardware.

Those with current generation cards have nothing to fear, with both the AMD RX 580 and the Nvidia GTX 1060 averaging at 91fps. The 580 has a few more struggles than the 1060, with minimum reports of 50fps and 70fps respectively, but both are strong performers.

It’s also worth noting that Black Ops 4’s strong performance may be down to its use of CPU resources. Where many games rely heavily on the GPU, Black Ops 4 spreads its draw more evenly over both graphics card and central processor. While this points to well-built software, it’s bad news for those looking to stream from the same PC that they’re playing on: the combination of Black Ops 4 and streaming software can be too much for a CPU to handle smoothly. We’ve suffered this in our own streaming activities, with the remedy being to stream via a second PC.

In addition, Black Ops 4’s performance varies depending on what mode you play. Due to their confined spaces, you can expect both PvP Multiplayer and Zombies to run at frame rates similar to those outlined in the graph above. Blackout, the battle royale mode, results in reduced performance due to its massive map and increased draw distance. On our GTX 1060 test rig we discovered that Blackout suffered a performance reduction of 14% compared to Multiplayer, with an average frame rate of 78fps. As such, it’s worth bearing in mind that you’ll experience a similar result on your own setup when swapping between Blackout and the other modes.

As you’ll have surmised from the previous section, there’s little to worry about when it comes to running Black Ops 4 at 60fps, at least when it comes to zombies and PvP. All but one of our test GPUs runs at above 60fps with all settings turned up as high as possible. The only exception is the R9 380, but at an average 59fps, it’s practically there anyway. With all cards running at this rate, there’s room to reduce settings from ‘very high’ down to ‘high’ to provide a performance boost with very little change in graphical quality.

In regards to Blackout, you’ll find that lower-end cards will need dialling back a little to hit 60fps. Start with using our high setup from the graphics analysis section above, and then make small sacrifices with nonessential elements like screen space reflections and setting dynamic shadows to ‘self only’. More recent cards shouldn’t need these tweaks, but will experience something closer to 60fps than the 90fps range seen in Multiplayer.

In short: those with graphics cards from the past few years have little to worry about.

With Call of Duty: Black Ops 4, developer Treyarch and PC port specialist Beenox have done a fantastic job of making what is now traditionally seen as a console shooter feel at home on PC. While it’s true that the previous few Call of Duty games have felt well suited to our platform, the soaring frame rates of Black Ops 4, even on aging hardware, points to the care put into its development.

It’s worth being aware of the game’s hunger for CPU power, which goes against the traditional trend of being demanding of the GPU, and this means that doing other tasks alongside playing – such as streaming – can lead to big performance issues. But for those just looking to sit down and play, Black Ops 4 is a winner.

It would have been great to have presets and a benchmarking tool in the graphics options, as the former is entirely standard and expected in PC gaming, and the latter is becoming more common. Without them, initial setup can be a little fiddly, even with the automatic detection. But with the kind of performance Black Ops 4 provides, you’ll likely not need to make all that many tweaks to hit the right performance markers.