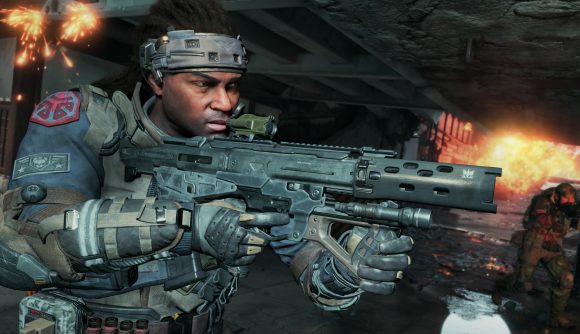 As the leading triple-A military shooters, Battlefield and Call of Duty have waged war on multiple platforms for most of the past decade. That’s why a certain player’s recent ban comes with a bit of irony – Florian Le Bihan, core gameplay designer at DICE on Battlefield V, just got banned from Treyarch’s Black Ops 4.

Of course, Le Bihan isn’t just a DICE dev. He’s also a former esports pro who played for Fnatic, and by all appearances it looks like he’s gotten banned because he’s too gosh-darned good at shooters. If you look at some of the examples of that gameplay in a video below, you might get an idea of why plenty of commenters are referring to him as a human aimbot.

In one Reddit thread, a handful of fellow DICE devs have chimed in. One says “We’ve had internal conquest playtests where player #2 for has 40 kills, and above him is Florian is with a cool 130.” Another says “I think he’s playing with one hand in our internal playtest just to not piss off everyone.”

We don’t know for sure that Le Bihan’s skill got him banned, but as VG247 notes, there’s no other apparent explanation for why he’s gotten kicked out of Black Ops 4. I mean, look at that aim. Who needs cheats when you’re playing like this?

For now, Le Bihan is petitioning Treyarch on Twitter to get back in the game, and I wish him the best of luck – though I certainly never want to meet him in-game. In the meantime, we can look forward to the Battlefield 5 release date. Hopefully DICE devs are immune to bans in their own games, but only time will tell.