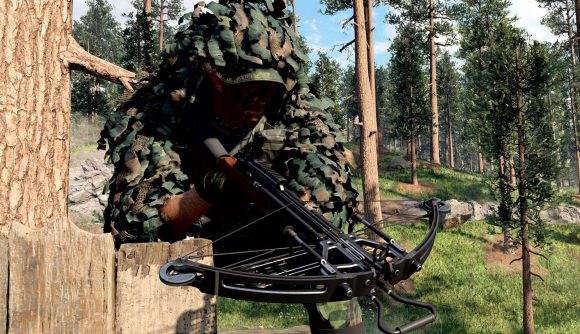 That leaked crossbow arrived in Call of Duty: Black Ops – Cold War last week, but some players are having trouble getting it. Despite completing the necessary challenges in the FPS game, some are left without the weapon in what seems to be a strange bug.

Reports are starting to build up on r/BlackOpsColdWar, as players post screenshots of a scorecard telling them they have the appropriate amount of One Shot, One Kill medals, but yet, no crossbow. “Help! I have finished the challenge for the crossbow but it won’t let me use it. Any ideas?” reads one post. “I have done all 15/15 challenges to unlock the weapon. I have stayed in all the matches. The progress bar shows 15/15 but I still don’t have the crossbow. Why is it not working? Any fixes?” says another.

Most are from Friday, April 2, but one user’s submission claims they’ve had the 15 points required since Thursday, April 1. After the R1 Shadowhunter leaked, developer Treyarch announced that everyone who’d unlocked it through regular progression, would be docked one point for when it came out properly. Some are contemplating just buying it in the store if nothing changes. “Did the challenge, X-Bow won’t unlock,” says a poster. “Of course, I could buy it after working for it because the store never has bugs like this.”

Here’s one of the posts: