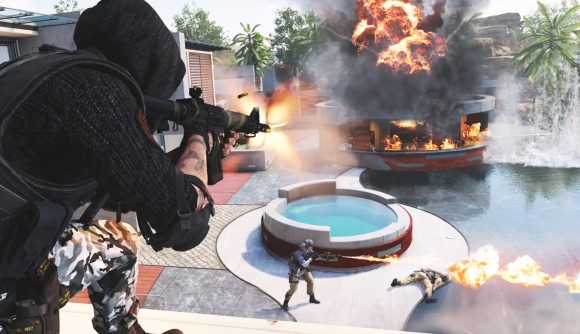 Call of Duty: Black Ops – Cold War and Warzone are about to kick off season two, and to celebrate, select multiplayer modes will be free to play from February 25 – March 4, the first week of the new season. During the free week, everyone will be able to check out the new Zombies Outbreak mode, plus several of Black Ops – Cold War’s traditional multiplayer game modes.

The new Outbreak mode for Zombies is a more open-world type of experience – it’s set in the massive Ural Mountains map, where you’ll be driving from point A to B in order to complete various zombie-related objectives and challenges. You’ll have to work together with your squad to conduct weird experiments, all while being beset from all sides by the ravenous dead. After each phase, you can opt to bail out through the dark aether portal that appears, or press your luck with increasingly difficult challenges.

For your more traditional multiplayer modes, the Apocalypse 24/7 playlist will be open to all during season two’s kickoff week. It’s a series of game modes set in a jungle base deep in the Laotian wilderness. You’ll be able to try out team deathmatch, kill confirmed, domination, and hardpoint modes for free.

You’ll also be able to try out Gun Game, which has you fight you way up through a pre-set list of 20 different weapons, trying to get a kill with each one in order. The Call of Duty blog also lists Gunfight Blueprints, Face Off, Team Deathmatch, Domination, and Nuketown 24/7 as being available for free during the week.

When one chapter ends… another begins.

Get ready for Season Two of #BlackOpsColdWar and #Warzone. Available on all platforms February 25th. pic.twitter.com/nPQebfO1HR

We'll need all the Operators we can get.

If Call of Duty isn’t your jam, check out some other great free PC games you can jump into right now.