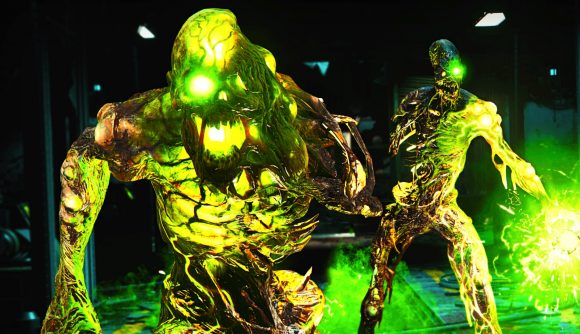 Uh oh, it looks like a new Call of Duty: Black Ops – Cold War mode has leaked ahead of time. Players were swift to notice that there was a mention of a new mode on the Call of Duty companion app. It’s gone now, obviously, but players were able to pluck two images and a prompt to watch a trailer.

One image (thanks, Modern Warzone) features a black, grainy backdrop with the Call of Duty: Black Ops – Cold War text on it alongside a passage that reads “Welcome to Outbreak – a new, large-scale zombies experience”.

This isn’t all totally out of the blue. Developer Treyarch has been teasing zombies-related content on its Twitter account over the past week. Players have also been met with oodles of zombie teases in Warzone following a recent update. Players stumbled across the Cold War Zombies trial machine in a hospital found in Warzone’s rumble playlist in Verdansk. There’s a note slapped to the side of it that reads “prove yourself, to the victor go the spoils”, but the machine doesn’t do anything if you interact with it right now. So no proving yourself just yet.

Players are also being hit with an on-screen scrambling effect in certain moments in Warzone. It differs here and there but usually involves some muffled speech or morse code. A call for help, maybe? Who knows.

The trailer and other information isn’t available yet. #Warzone #BlackOpsColdWar pic.twitter.com/GolxdX14Wm

We don’t know much else right now. Call of Duty: Advanced Warfare also has an Outbreak map that involves putting together an exoskeleton to survive an onrushing horde of zombies. We’ll need to wait and see if it’s related in any way.

"There's an operation underway in the Ural Mountains.

I have to stay in the field." pic.twitter.com/CquKmfNOkX

What we do know, though, is that the Call of Duty Cold War and Warzone Season 2 release date is confirmed for February 25, so I’m sure there are plenty of teases to come. So far, we know Call of Duty: Cold War Season 2 will feature the crossbow, Galil, and Naga. We’ll have to wait and see what’s added to the list.