Activision has finally pulled the tarp off Season 2 of Call of Duty: Black Ops – Cold War and Warzone, and revealed that the release date is set for February 25. When the new season kicks off, you can expect to find loads of new content for both Black Ops – Cold War and Warzone, including new game modes, weapons, and progression goals. There’s a lot to get through here, so let’s dive in.

First, Warzone’s Verdansk map is getting new and improved points of interest, which the Call of Duty blog provides a few ominous hints about. There are new places to scavenge for weapons and gear, but Activision advises caution – “something major is beginning to rumble deep underground”, the blog says. One of the new locations is a cargo tanker that matches the description of a missing vessel called Vodianoy. “The ship is carrying unknown cargo, and its crew are not able to be contacted”, the blog reads, and so odds are pretty good that something bad has happened to them.

Warzone is getting two new modes for Season 2. Exfiltration will launch during the season, and it introduces new mechanics to Warzone’s battle royale game rules. In Exfiltration, players will race to find and secure a portable radio. If your team is able to find it and hold on to it for a certain amount of time, you’ll win the game – but whoever’s holding it will be marked on all players’ maps as if they were a Most Wanted Contract HVT.

During launch week, we’ll see the arrival of Rebirth Island Resurgence Extreme, which increases the mode’s player count to 90. That’ll make the place a more target-rich environment, so keep your head on a swivel.

Look for what's to come in Season Two of #BlackOpsColdWar and #Warzone. pic.twitter.com/cqos7sUYeC

Black Ops – Cold War is getting a host of new features and activities for Season 2, which expands Zombies mode, adds new weapons and operators, and plunks in some new multiplayer game modes to boot.

Over the course of the season, expect to see four new operators become available, as well as a raft of six new weapons. These include the FARA 83 assault rifle (which you can earn for free by hitting tier 15 on the Season 2 battle pass), the LC10 SMG (tier 31), the Machete special, E-Tool melee weapon, the R1 Shadowhunter crossbow, and the ZRG 20mm bolt-action sniper rifle.

Zombies will the new Outbreak experience arriving during Season 2’s launch week. This takes the Dark Aether storyline to the Ural Mountains, opening Zombies mode up to a large-scale map. Activision says you’ll face new enemies, tackle team objectives, and find new rewards – but that we’ll hear more about the mode from developer Treyarch in the days to come.

Outbreak will introduce a new field upgrade called Frenzied Guard, which acts like a massive taunt ability that draws zombies away from your teammates and toward you. There’s also a new ammo mod called Shatter Blast that you can find in the Pack-a-Punch machine and Elemental Pop, and it makes all your bullets do explosive damage. That’ll come in handy against heavy zombies, no doubt. 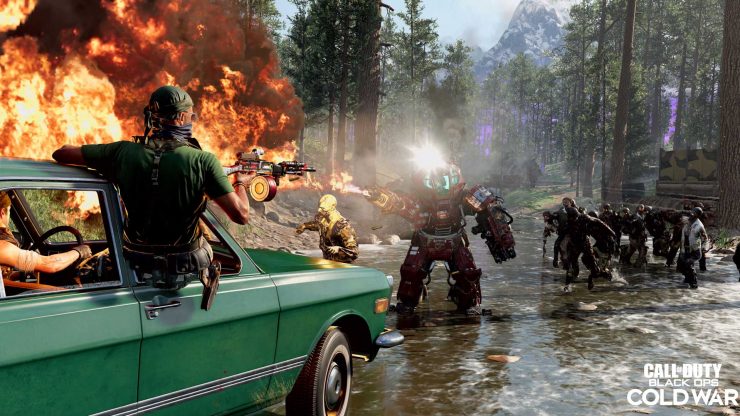 Season 2 will introduce four new multiplayer maps to Black Ops – Cold War: Apocalypse (6v6), set in the jungles of Laos; the traditional Russian village of Golova (muti-team); the Mansion (2v2, 3v3) in Havanna; and Miami Strike (6v6), which is set against the bright murals of South Beach.

New multiplayer modes for Season 2 include Gun Game (Free-for-All), Stockpile (6v6), and Hardpoint (multi-team), plus a new scorestreak called Death Machine that gives you a handheld minigun. You’ll also be able to use Death Machine in Zombies mode.

Wrap all that up with some new vehicles, new season challenges, and some new prestige levels, and it’s clear there’s going to be plenty to do this season in Call of Duty. The Call of Duty blog has the full details, so head that way if you want nitty gritty.