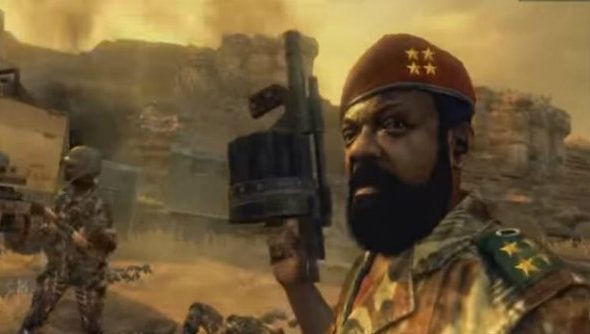 Activision are being sued by children of guerrilla leader Jonas Savimbi, who claim Savimbi is portrayed as a ‘barbarian’ in Call of Duty: Black Ops 2. They are seeking €1m in damages, according to a report by the Guardian.

None of these shooters have Savimbi in them, but they are actually all good – PCGN’s list of the best FPS games on PC.

Beginning in the ’60s, Savimbi led an extended insurgency against the Angolan government and its dominant party, the MPLA. His death came in 2002 when he was killed in a battle with government forces.

Call of Duty: Black Ops 2 opens with a mission where the player takes part in an assault on MPLA forces, allied with a grenade launcher-wielding Savimbi.

The family’s lawyer Carole Enfert claims that Savimbi is represented as a “big halfwit who wants to kill everybody”, where he was actually a “political leader and strategist”.

On the other side, a lawyer for Activision Blizzard, Etienne Kowalski, rejects this claim, stating that the game shows Savimbi as a “good guy”, and “a character of Angolan history, a guerrilla chief who fought the MPLA”.

While the footage doesn’t exactly show Savimbi sat at a war table strategising, it does seem to show him as a fearless leader – one who even the American forces acknowledge as brave.

It doesn’t seem to show him in a negative light – although in real life he certainly did play a role in thousands of deaths – but that’s easy to say for someone who isn’t one of his many children.