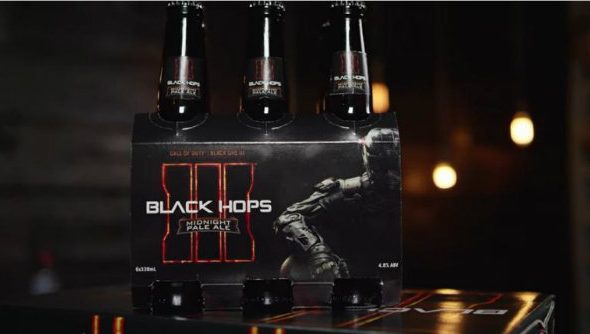 A week ago it was announced we were getting Fallout branded beer from Carlsberg. Well, apparently Australia is getting a Call of Duty-themed ale, because why not?

Here are the 15 best first-person shooters on PC.

Beer kind of fits with Fallout. I mean, it’s a world where we spend much of our time scavenging through containers, some of which contain beer. It makes slightly (quite a lot) less sense for Call of Duty to get a beer, but here we are.

Luckily, you won’t have to go to the bar and ask for a pint of CoD, because that wouldn’t be very appetising.

“Black Hops Midnight Pale Ale” is apparently “light and refreshing with tantalising hop aromas of pine and citrus fruit.” It is fused with roasted wheat to give it the deep black colouring, allowing it to retain the less harsh flavours of a pale ale.

The 4.8% beer ships on November 2 in Australia only – you can buy it here. Meanwhile, Black Ops 3 launches on November 6.