Muhammad Ayub is an associate level designer at Treyarch who’s been making Call of Duty multiplayer maps for several years. In a recent and very interesting blog post, he shows how you might go about designing a fun map while considering some basic design principles.

If you’re ever stuck for something to play, you should check out our list of best PC games.

In a blog post featured on Gamasutra, Ayub explains his choices in plotting an entertaining multiplayer map for Call of Duty: Modern Warfare step-by-step, while paying deference to some of the design rules and principles he’s learned over the years.

He considers elevation of the land, for example, noting that part of the map has slum areas which have shanties piled on top of one another. At the opposite end of the map there’s hills that offer cover and vantage points, and in the centre runs an open quarry that must be crossed in order to make it to the other side.

Height variations are important, he says, so as to block long lines of sights and to encourage intimate gunplay. Each step is accompanied by a diagram, such as this which delinates each zone: red being the slums, green being the hills and yellow being the quarry: 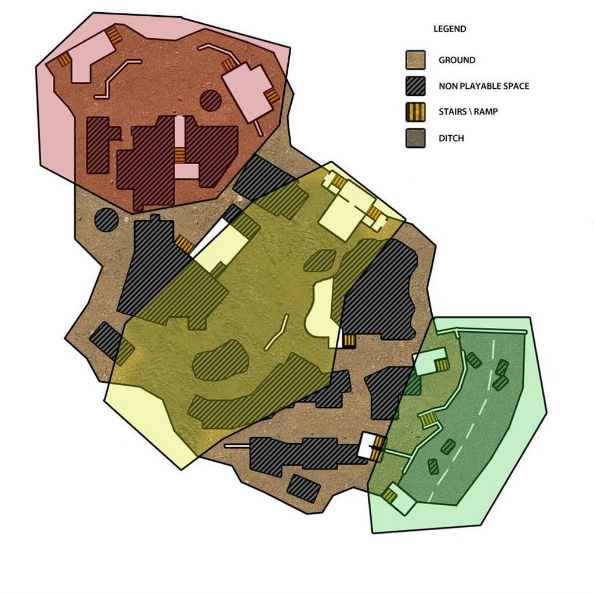 “I have always designed Call of Duty: Modern Warfare multiplayer maps keeping domination game type in mind,” Ayub says. “This helps a lot in designing a well balanced map to make sure that one team does not have unfair advantage over another.”

With this, Ayub details how staggering flags across the field makes for balanced play – having one flag nearest each team’s base and one in a neutral, more central position. Lastly, the same applies to points of interest which, like the other locations of the map, might provide cover or sniping posts.

The entire post is well worth reading in its entirety, and is a fascinating insight into level design from a one-time hobbyist turned pro.