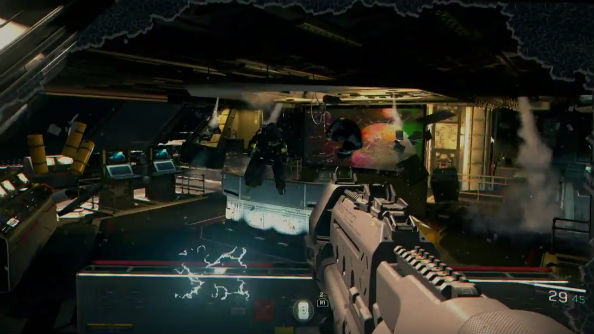 Explosions and robots and now space! There’s a new Call of Duty: Infinity Warfare trailer out and it’s still definitely Call of Duty despite all the rocket ships and space grappling hook-styled bells and whistles.

Showing off a heap of single player gameplay, the trailer gives a better idea of what players will be doing throughout the bulk of Infinite Warfare’s campaign. Check out the trailer below.

It’s impressive how well the spaceship combat transitioning seamlessly into the more typical Call of Duty boots (almost) on the ground gameplay. It’s unlikely any of the floating around in space and hopping in and out of spaceships will make it over to multiplayer.

Oh… and guess what, there’s some lovely shiny Modern Warfare Remastered footage too. It’s basically a supercut of all the story mode’s best bits – except in high definition. It’s nothing we haven’t seen before, but seeing as it’s one of the best shooters of all time it’s still welcome. Trailer below.