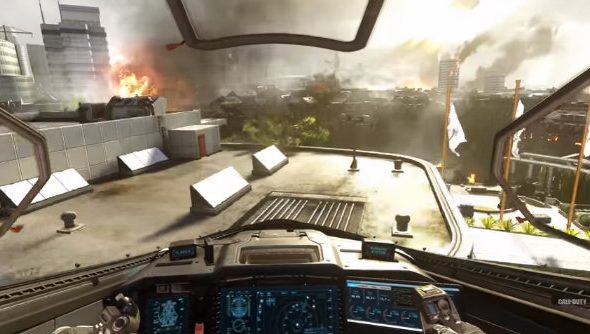 People have been asking for Call of Duty to shake things up for years. Well, it’s finally time, as Infinite Warfare looks set to be the biggest departure yet. Hell, it even departs our planet and heads into space, opening gameplay up to some funky gravity rules and spaceship combat. Now people are complaining because it’s not the same as the other Call of Duty games. The moral of the story is: never listen to anyone.

Get your galactic fix in our list of PC’s best space games.

What exactly is Infinite Warfare doing that’s new then? Well, as the trailer suggested, there will be space combat. You might have assumed this means there will be a few on-rails blasting sections, but apparently that’s not the case.

“You’ll engage in different kinds of air combat throughout the campaign,” design director Jacob Minkoff told Forbes. “There are open dogfighting arenas with full freedom of flight in all directions, where you will take part in battles against both capital ships and enemy fighters, as well as exciting on-rails attack runs.”

I do wonder how open these dogfighting arenas will be. Hopefully you’re not enclosed into a small area, its boundaries an invisible wall that causes you to bounce off. That would ruin it. This is space, you know, so give us some space.

Other comments do hint at there being some sort of freedom, however, as you’ll be using your fighter, the Jackal, to get to “optional missions”. Hopefully this means you can deviate from the path, not that there’s a level selection with a loading screen of your ship, like Destiny, another Activision-published game,

From the same interview, it appears this new environment will open up combat for some interesting, mind-bending dynamics.

“As a SCAR, a spec-ops soldier trained to fight in space, you have the use of a grapple and RCS thrusters on your suit,” explained Minkoff. “These allow you to quickly cross open spaces and get cover. Once you find a good vantage point, you have mag-boots that allow you to lock onto surfaces no matter which way they are oriented.”

Infinity Ward recently clarified that the movement system would make Black Ops 3 players feel at home, but it does seem like they’re getting expanded. Imagine a multiplayer where people could be camping on the ceiling. If this sort of thing is possible, it could make for some clever map design, and that’s one thing you can’t argue the team is excellent at.