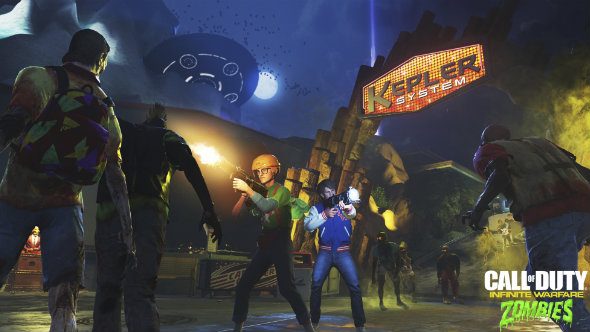 Call of Duty Zombies is back for Infinite Warfare and it looks sufficiently mental, this time whisking players to the ’80s to fight the undead in a film studio.

For more flesh eaters, here’s our list of the best zombie games.

Zombies in Spaceland, as it’s called, puts you in the sneakers of four aspiring actors who are auditioning for a part in the new film from director Willard Wyler, portrayed with voice and likeness by Paul Reubens.

“Call of Duty and Zombies in particular has such an incredible history with passionate fans, which inspired us to take all the co-op action that has made the series so great and fuse it with one of our favourite decades in pop culture: the ’80s,” said Brian Bright, project director at Infinity Ward. “Zombies in Spaceland is an all-new zombies experience where day-glow meets fright nights.

“It’s accessible for new players, but also has a deep layer of progression, brimming with Easter eggs and various game features that will be a blast for hardcore zombies fans. We can’t wait for fans to go hands-on this fall.”

Because it’s completely batshit, the actors are transported into the movie and end up embodying their characters,four ‘80s archetypes: the jock, the nerd, the valley girl and the rapper.

David Hasselhoff plays a DJ in it.

It’s mental. Watch the trailer and see for youtself.