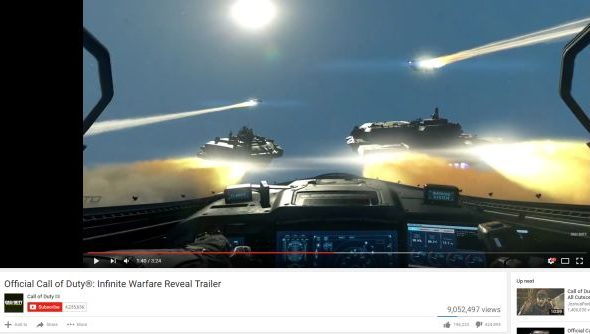 The quarterly Activision Blizzard financial call was last night. They’re usually fairly dull affairs, gaming boiled down to its facts, figures and who is making cash where. It’s rare an announcement gets out beyond a release window, and the Q&A at the end is all business to business, growth targets and dodging. This go round was a bit different, with one questioner asking about the huge number of dislikes the Infinite Warfare reveal trailer has received, and how the company responds. Eric Hirshberg, top man of the Activision half, acknowledged the passion of the community, but essentially said it’s not to be worried about.

Where will this year’s offering land on our list of the best FPS games?

Starting off by saying that there really aren’t other franchises or entertainment mediums where this level of passion is on display, Hirshberg goes on to point out that the actual impact of the downvote campaign has been minimal.

“While it’s very early, pre-orders are off to a very strong start. Views of the reveal trailer are up and, in fact, the number of likes per view on the Infinite Warfare trailer are the highest we’ve ever seen.” he explained, before comparing it to a similar situation with Black Ops 2, “We’ve seen this in the franchise before. The reveal trailer for Black Ops 2, which took the franchise into the future for the first time, had the most dislikes of any reveal trailer we had ever made at that time. And that went on to become our most successful game ever.”

He also points out that they are making sure to provide for those that prefer, as he puts it, “boots on the ground gameplay” with Modern Warfare remastered, while pushing the franchise further into the future than before. He finishes by saying that “What we know for sure is that if we always just did what worked in the past and never took any creative risks, we wouldn’t have a franchise. The day to worry is the day we stop trying new things.”

It’s a fair point. While the downvote ratio on the video is the worst the franchise has seen, the number of votes combined is less than 7% of the total number of views. While it’s not exactly superb to have this sort of thing front and center on your big reveal, it’s not representative of the majority. It is still ‘the new COD’ plus an old favourite, which will have drawing power with their audience, and casual fans like me are a lot more interested in it going to space than we would be in another retelling of Evil Corporation Attempts Takeover or Things Are Quite Bad In The Middle East.

You can have a listen in the archive, with this question starting at about 36 minutes. As for the rest of the call, there’s not a lot of news, other than a small note that Whispers of the Old Gods and Overwatch are going to be in the same financial quarter and everybody’s getting paid.We’ll see more on Infinite Warfare at E3 – where do you sit on the new COD?